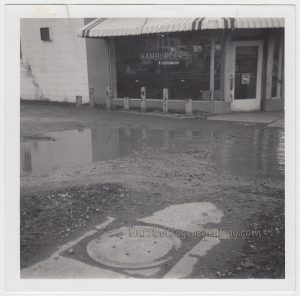 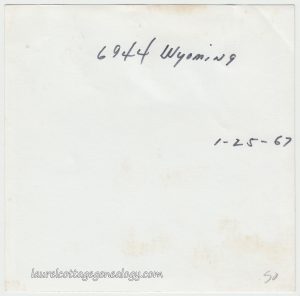 Like the prior post’s two photos, this one might have been taken by or for a real estate company. It shows a small restaurant, what one would affectionately call a hamburger joint, at 6944 Wyoming St., Dearborn, Michigan, one block south of Warren Ave.

We see faces and figures almost everywhere and this is a good one:  The partial image of a sentry-type guy standing straight (as sentries do) and looking to his right. The manhole cover is his armor and he is guarding the restaurant. 🙂

The sign in the window shows for sale; these photos below were taken from our visit to the area in June 2017. For how long the business has been vacant we’re not quite sure, maybe 2013-ish, per an Mlive business entry search. Anyway, you can still read the faint “Coney Island” on the big hanging sign, which was probably for one of the more recent incarnations, and the interior is neat, cool that is….There’s the old 1950s counter with the metal edging (I have the same type in my kitchen only my counter is yellow) the old counter stools, the Semper Fi U. S. Marines plaque proudly displayed off to the side next to the small U. S. flag, the definitely older country scene on the wall (1920s? maybe) and the two wall plaques. We’re betting the decor was still in place from Tony’s era. (We kinda feel like we know Tony a little, now. A cool guy.) 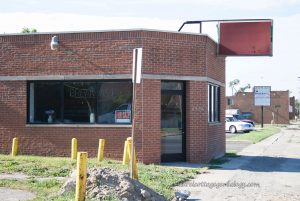 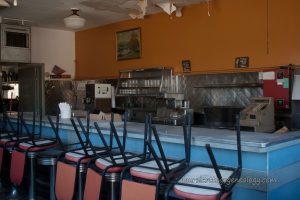 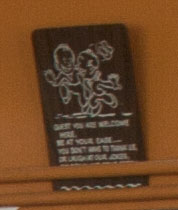 The display, above left is a shorter version of J. P. McEvoy’s popular poem, circa 1925:

“Guest, you are welcome here,

Be at your ease;

Get up when you’re ready,

Go to bed when you please;

Such as we’ve got:

The leaks in the roof

And the soup in the pot…

You don’t have to thank us

Or laugh at our jokes,

You’re one of the Folks.”

The one above right, shows a saying (how can we argue with it?!) by an unknown author and states:

“The man who invented work

Made one bad mistake:

He didn’t finish it!”