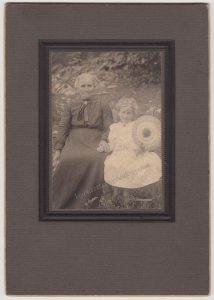 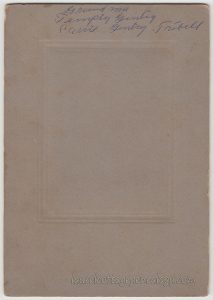 These are kin (I have southern roots so the vernacular comes natural) to Cay Ricker from the prior post (Cay, at least the name appears to be written as such) is cousin to Lula Gentry. Lula is possibly Sara Lula Ricker who marries Starling R. Gentry. Their daughter is Carrie Gentry who marries Thomas William Tribell. Carrie is the little girl in this photo, with her grandmother, Temperance Franklin who married Andrew Jackson Gentry. We were lucky to find all three photos with names and relationships on the back of each. Tempy, is written here as “Tempty” and maybe she was called both, we wouldn’t know, but Tempy seems to have been a common nickname for Temperance, according to many other family trees. And it’s a beautiful photo of two lovely ladies, seated outside, and posing for the camera. Carrie holds what looks to be a round fan.

Tempy was born Tennessee, September 1852, according to the 1900 Federal Census for Shelton, Laurel Township, Madison County, North Carolina. She appears there with her husband, Andrew Gentry and six of their children. Next door, or at least, next on the census taker’s entries, were three other Gentry families, including Carrie’s immediate family, though Carrie is not listed there, she would have been one day old. (By, the way, Tempy’s husband, was the enumerator of this census.) Tempy, per Ancestry trees, is the daughter of David Franklin and Rhoda Shelton.