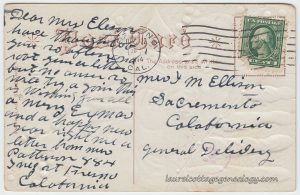 “Dear Mrs. Elison, have thought of you so often and…?…?…a letter but no answ. so will try again. This is wishing you all a Merry Exmas and a happy new year right me a letter from now Patterson 884 Inez at Fresno California.”

The sender of this card was Dwight Ives (or Ivees) Patterson, born in Pueblo, Colorado, December 14, 1892, son of William Edgar Patterson. From the 1915 Fresno city directory Dwight’s occupation is “carman” for the “Fresno Trac Co”, business address 884 Inez. WWI Draft Registration (1917) shows occupation street car conductor for the Fresno Traction Company, residence address given as 324 Inez. Passport records, including photo below, for Dwight show that by 1918 he was an engineer for the Democrata Mine in Cananea, Sonora, Mexico. We know from other postcards in our Alice Ellison Collection, that the Ellison Family had lived for some years in Pueblo, Colorado, so Dwight and the Ellisons may have been neighbors at some point. In any case, he sent a beautiful Christmas postcard. Note the amount of money from Santa in one of the stockings! 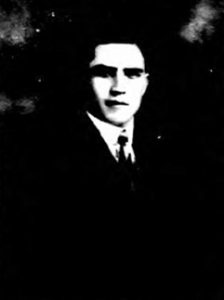