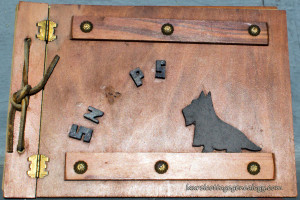 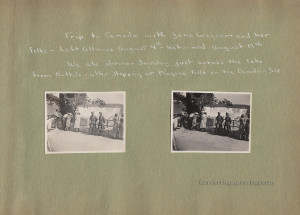 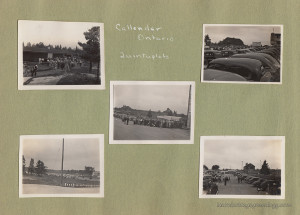 Tourism for the Dionne Quints 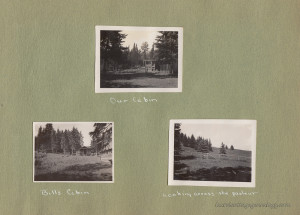 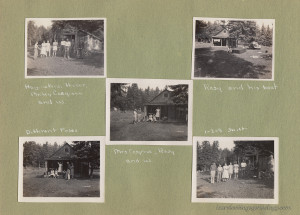 The Cosgroves in the Nipissing area? 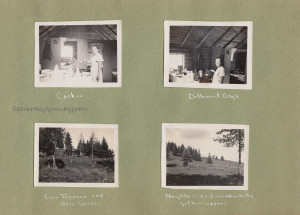 The cows were the getter-uppers 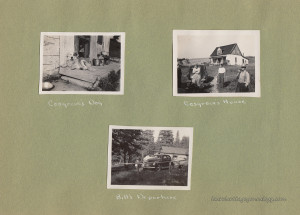 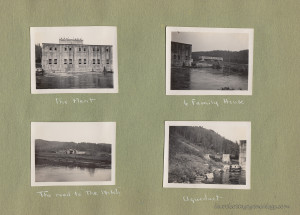 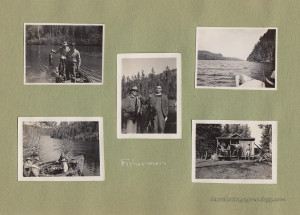 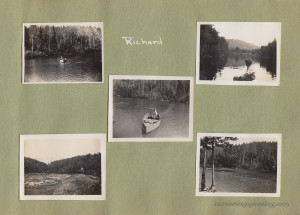 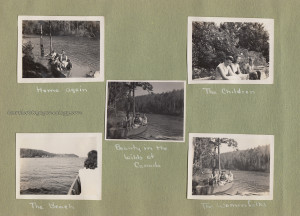 Beauty in the Wilds 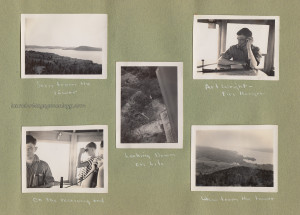 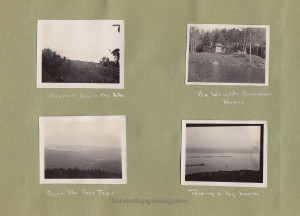 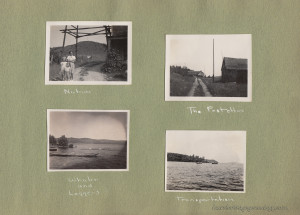 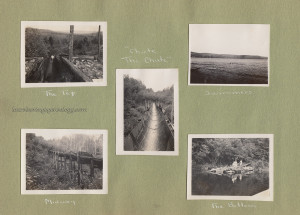 A Walk Down the Chute 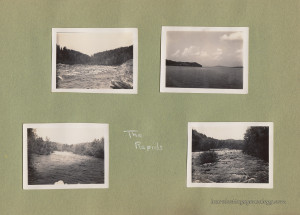 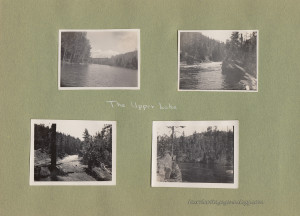 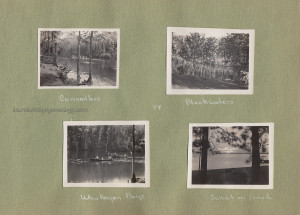 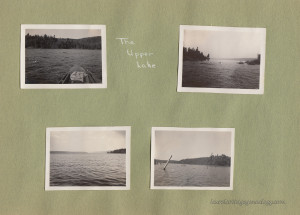 More of The Upper Lake 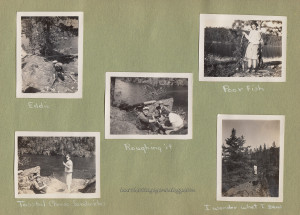 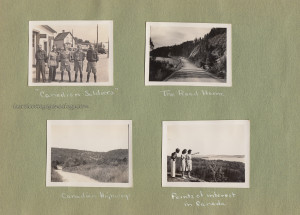 This photo album, containing 84 vacation photos, is from the early 1940s, and was found in an antique store in Prunedale, California. The compiler of this album (who incidentally has a great sense of humor) describes the set as:  “Trip to Canada with Jane Wagner and her Folks” – going on to say, “Left Alliance August 4th – returned August 17th. We ate dinner Sunday just across the lake from Buffalo – after stopping at Niagara Falls on the Canadian Side.” Alliance may be Alliance, Salem County, New Jersey; there are some Wagners showing up in the city directories and census records for Salem County, during that time period. Looking back at the 1940 calendar, we find that August 4th was a Sunday, so the travelers must not have started their journey more than a day’s drive from the Buffalo, NY environs, to have dined there in the evening. The first page of the album shows the Canadian side of the Falls; note the men in Highland uniform, and the guy on the left taking their picture with the box camera.

The caption for the second page “Callender Quintuplets” was a puzzler at first. I then thought the “quintuplets” part referred to there being five photos on the page (and then thought “how adorably hilarious”) but research on Callender, Ontario shows that Callander was the town that became famous for the birth of the Dionne Quintuplets. According to the mycallander.ca website, the five girls were born at home in the small town of Corbeil, “just minutes away from Callander” but it was Callander that became the site of the tourist attraction for the world-famous Quints, whose notoriety drew in millions of visiters. The Quints were born May 28th 1934, and these photos were probably taken either in 1940 or in the early 1940s. It would have to have been at least 1940 because the car that appears in the “Bill’s Departure” photo (6th page in the album) is a 1940 Ford Deluxe 2-Door. And the “Post Toasties” cereal box in the photo (5th page) under the caption of “Different Angle” looks to be from around 1940, as well. Here is a more close-up version of that photo with “Cookie” in the foreground. We can sort of see the other grocery store items on the table:  looks like that could be a Morton’s salt umbrella on the one package, and that is for sure, a Nabisco product to the left of the umbrella one. And don’t you love the old coffeepot? 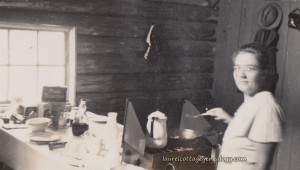 Besides the place name of Callender being included in the photographer’s description in this album, we are lucky to have another way of identifying the location of these photos:  the writing on the side of the canoe on the left in the “Waukeagan Boys” (17th page) photo is identifiable as “Wigwasati.” Camp Wigwasati according to their website has been in business for over 75 years, operating for the last ten under the name of Camp Temagami, which is located on a twenty-acre island on Lake Temagami, Ontario. The boys and their guides sure look like they are having fun. Close-up version below. 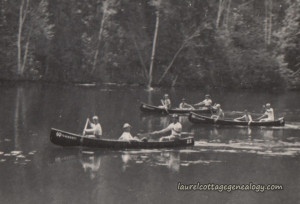 One of the things that I think we love about these old photos albums, besides the time-travel factor, and the photos that in particular, make us feel that we are right there (the great one of Richard on the top right of the 9th page) is that they remind us of ourselves. In reading some of the captions, we might think, “Hey, that sounds just like something I would say.” Such is the case for me with the “Poor Fish” and the “I wonder what I saw” captions. The “Neighbors and incidentally getter-uppers” caption for the cows is priceless. Whoever the photographer/album compiler was, they must have been fun to know.

Research of the additional names in this post  does not show any majorly concrete findings. “Rosy” was probably a nickname (Rosy Cosgrove) which wouldn’t normally come up in census and voter lists. The same might be true for “Huber” but Huber does show up as a man’s given name in census records; same for Haymaker, as a family name. Back to Cosgrove again:  there are a lot of Cosgroves showing up in various Canada voter lists in the Nipissing and North Bay, Ontario area, including an “R. Cosgrove” in Nipissing 1945. As to Art Wright, Fire Ranger:  there is an Arthur William Wright, born England 1890, who shows up on various records in the Nipissing area, which would mean that the Art Wright in the photo would be about 50; but to me, he looks more like he is in his late 30s or early 40s. There is also an Arthur J. Wright, born about 1905, showing up on the 1911 census in Nipissing, age 6. Anyway, whether either of these two guys are him or not, the photos of this guy here are nice. The one photo captioned “On the receiving end” (11th page) is great. It might remind you of a Norman Rockwell painting, like the Thanksgiving Norman Rockwell painting, but in reverse:  the person in the background is looking at the camera; the person in the foreground (cutoff in the frame like in the Rockwell painting) is looking toward somebody or something else but smiling.

Regarding the photo of “The Plant”: this is undoubtedly a photo of a hydro-electric plant but where this is or was exactly is unknown. I am not seeing an exact match of this power plant online, and there is more than one area known as “The Notch” coming up. Of course, in general we are looking at photos in and around the North Bay, Nipissing, Lake Temagami and Callander area of Northern Ontario. The photos of the “chute” are very interesting. As you can see by the photos, the vacationers walked down what looks like a pretty long (dry!) chute, that would have been used to transport water to the plant, presumably, or to a plant. I’m not sure if this would have been the same plant in the photo; it’s possible it was from a different location and no longer in use. Others to mention re i.d. purposes:  maybe “The Post Office” will be able to be found in old photos online; can’t forget the great one on the last page of the Canadian soldiers posing for the camera; maybe someone will be able to identify one of the soldiers, or for that matter, anyone else in these wonderful photos. Anyway, this photo album is a real treasure, from the wooden cover missing the A, to the final poetic finish of the “Points of interest in Canada” photo.