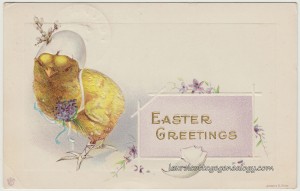 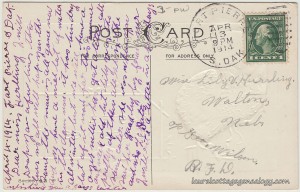 Here’s one more official Easter postcard for this year and it’s of another chick, so adorable, wearing her little shell hat with pussy willow decoration, and carrying a little bouquet.

“April 4, 1914. Fort Pierre S. Dak. Dear Miss Herlling. I will drop you a few lines this tues[?]. we all well hope you the same. the snow is all gone now and we have a nice bit of water in the…?…now. it has bin dry all winter but we will have a lot of it now for this summer & yes nellie has got a little colt one week old but lily…?…is the same color she was when you saw her. good by, by for now[?] …and…?  L. E. Datts. I will write a letter in a few days. Wishing you a joys Easter.”

Lily was a public school teacher who was born in Wisconsin, about 1885. The 1920 Federal Census for Sheboygan finds Lily and her sister, Elsa May, living with their brother R. B. Herrling. Various short newspaper clips can be found online, like the two below, which show that Lily traveled to various locations to teach: