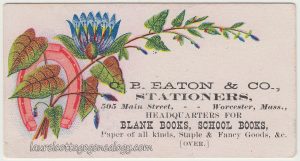 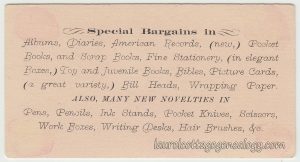 I used to work at a call center and we took calls from all over, so I learned to say “Mass” (after a city) for Massachusetts from the people that live there, which is why you will often find the state typed as such on this website (rather than MA); in my mind I’m hearing layer upon layer of beautiful people’s voices stating (whatever city) Mass…..Just as in I picked up the, what I think of as a southern expression, “I appreciate you” by way of saying “thank you.” So lovely! Not just thank you for doing something for me, but I appreciate you, in your entirety, so to speak. (And I appreciate you, dear readers and browsers.) So sentimental this morning as I’m typing this – Mush, mush forty dogs in Alaska! But on to our trade card with its pink horseshoe:

C. B. was Charles B. Eaton, born about 1832, listed there on the 1880 Federal Census for Worcester, living at 690 Main St., occupation  “paper store” with his wife Mary C. and daughters Alice C. and Cora B. Eaton. All are native to the state of Massachusetts.