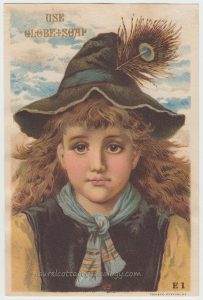 This seems like a good trade card for autumn, of a boy with long hair, wearing a felt hat with a peacock feather and a scarf with stripes. The colors are wonderful, along with the boy’s expression, the clouds in the background almost seem to be moving…..all-in-all a beautifully-done card. The lithographers were Gies & Company, out of Buffalo, New York. And this particular design was evidently a popular one:  others can currently be seen for sale online showing several different companies or brands being advertised. In addition there’s one version (lithographer unknown) with the printing underneath, “Young Captain Jinks,” which was paying homage to the public’s love of a song or a play, or perhaps both.

“Captain Jinks of the Horse Marines” was a humorous number (you can find it on YouTube) written in the mid-1800s that is credited to T. Maclagan, or William Lingard, or sometimes both. It was later very much in the public eye as a comic play by Clyde Fitch, which debuted in January 1901, and starred Ethel Barrymore. And in 1975 the title was re-introduced as an opera written by Jack Beeson.

Back to our card…..According to a 1918 excerpt (below) from Moody’s Manual, the Globe Soap Co. was incorporated April 27, 1881 in Ohio. They included the brand names, Grandma’s Borax Powdered Soap, Export Borax Soap, Pearl Soap and others. The plant was located on 23 acres in Saint Bernard, Ohio.

Globe Soap was bought out by Procter & Gamble in 1928, along with some other soap manufacturers around this year, tallying Globe Soap’s run to around forty-seven years. Interestingly, articles in 1928 report the possible buy-out, and then that it was only a rumor.