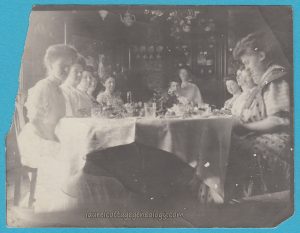 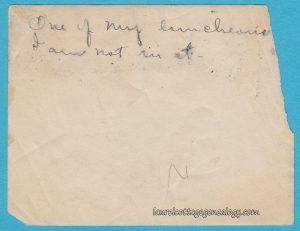 …..or Twelve Ladies and the Floating Tea Cups…..

A beautiful moment in time, of twelve lovely women gathered round the hostess’ dining table for lunch and conversation. Wonder what the topics of the day were? Men and children, politics and fashion, books and art, friends and family….Don’t you love the varied expressions, some looking at the camera, one in profile, all with the hair swept up, and then the ruffles, the polka dots and the high-necked collars…..But the icing on the cake, so to speak, is the floating teapot-teacup effect:  the big teapot just left of top-center and the teacups to our right (hanging from hooks in the tall cupboard) and directly above them….some kind of reflection between the cupboard glass and the mirror above the buffet?…..And note the beautiful pitchers resting on the buffet with their reflection behind them, not to forget to mention the wallpaper, most easily noticed behind the set of four cups and saucers displayed on the small wall shelf.

Like the image two posts ago, this one was scanned with a background we grabbed that was handy. In this case the photo rests on the back of a coupon we got yesterday from Second Chance Thrift Store in Monterey, where the most wonderful book was found:  The True Power of Water by Masaru Emoto. I feel compelled to mention this book here, check it out if you haven’t yet, highly (ever so) recommended (!). 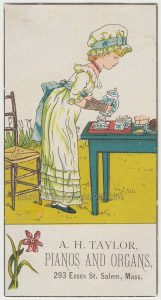 This could be the only surviving trade card for this company in existence, though that might be “doing it too brown” as they say in Regency terms. (I wonder if Georgette Heyer interspersed that era’s vocabulary into her own present-day conversation, and if so, what the response was, blank looks?) In any case, this is a charming card showing a young maid setting up for a small outdoor tea party.

A. H. Taylor was Albert H. Taylor, born about 1857 in Manchester, Massachusetts, son of John M. Taylor and Ann H. Lee. He married Cora B. Kenney June 11, 1879. The 1880 Federal Census for Salem, shows Albert’s occupation as piano tuner, and the household at that time was Albert, Cora and their one month old son, Albert H., living at 88 Federal St.

By 1900 they have another family member, Louis C, and the family is now in Bridgeport, Connecticut, at 111 Hicks St. Albert, Sr.’s occupation is listed as music dealer.

And by 1910, Albert and Cora have relocated to Springfield, Mass. Albert’s occupation appears to read as “com. traveler, pianos,”  so, commercial traveler or traveling salesman in the piano industry.

As for city directories, the 1881 for Salem lists A. H. Taylor at the 293 Essex St. address, under headings of Music Stores, Piano Dealers and Piano Tuners. Evidently, he ran an ad on the front cover of that directory, but the cover is missing. The 1879 directory shows a music store belonging to H. R. Perkins & Co., the 1880 directory wasn’t found and nothing shows for the 293 address after 1881 until 1888 (a house furnishing store). So, this trade card can pretty accurately be said to be from 1880 or 1881. 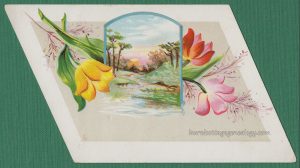 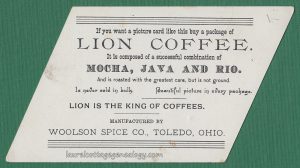 I like the effect of these two images together, as if you’re looking at a roof from above, and what a roof it would be! (although the front of the card should be upside down for that to really make sense.) But the background on this is just the back of a book (because we’re always searching for something handy to use when scanning odd-shaped cards.) The back reads:

“If you want a picture card like this buy a package of Lion Coffee. It is composed of a successful combination of Mocha, Java and Rio. And it is roasted with the greatest care, but is not ground. Is never sold in bulk. Beautiful picture in every package. Lion is the king of coffees. Manufactured by Woolson Spice Co., Toledo, Ohio.”

Here’s a great article on the history of Lion Coffee and the Lion’s subsequent reawakening in Hawaii. 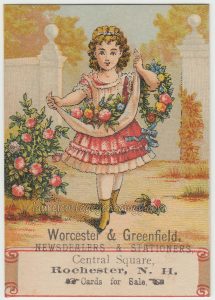 A beautifully stylish little girl, with a wreath of flowers on one arm and just picked roses overflowing from her makeshift cloth “basket,” advertises:

We’re finding no other trade cards for this company online, at the time of this post.

Worcester & Greenfield were Horace L. Worcester and his partner and brother-in-law Frank Greenfield. The firm started in 1881 and in 1899 Hiram, having earlier bought out Frank’s share, sold out of the business. Hiram Worcester was twice mayor of Rochester, according to his biographical sketch, which includes this photo: 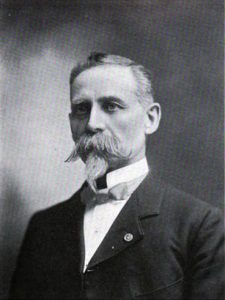 From another Google eBook search we found the following entry for the business in Leading Manufacturers and Merchants of New Hampshire:

“Worcester & Greenfield, Books, Central Square. – The popular headquarters in Rochester for books, stationery, periodicals and literature of all kinds is the establishment of Messrs. Worcester & Greenfield, on Central Square. The business was originally established about fifteen years ago by Mr. I. D. Mooney, the present proprietors succeeding to the control in 1881. To the stranger, from its literary attractiveness, it is a place not to be overlooked, while it is the chief rendezvous to the literature-loving people of this community. To drop in here for the daily paper and a glimpse at the last new book or magazine is an every-day duty with the majority of the people resident here. The stock is large, choice and complete in every department, including the works of standard authors in prose and poetry, the latest publications of English and American writers, in fine bindings and pocket style; toys, games, picture books, writing desks, portfolios, leather goods, and desirable gifts for the holidays in great variety and profusion. The firm also have a circulating library, containing six hundred volumes, which is very liberally patronized by both old and young. There is also a fine assortment of cigars, tobacco and confectionery, and the store is the headquarters in Rochester for the Boston daily and state papers. The members of the firm, Messrs. H. L. Worcester and Frank Greenfield, are young men of enterprise and popularity.” 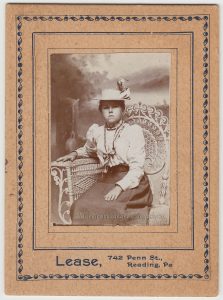 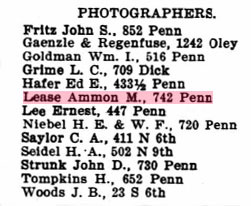 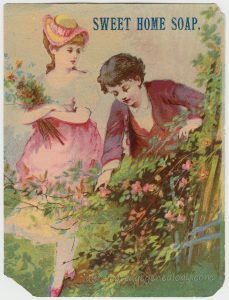 Here’s a trade card, a little worse for wear, but still….a beauty:  depicting a lovers’ scene of a young man cutting roses for his sweetheart (or maybe clearing a path for her, or both).

Buffalo, New York native John Durrant Larkin (1845 – 1926) was the founder of J. D. Larkin & Co., manufacturer of Sweet Home Soap, a bar laundry soap, and with the help of the marketing genius of his brother-in-law Elbert Hubbard (1856 – 1915), became one of Buffalo’s most successful businessmen. Hubbard is reported to have been Larkin & Co.’s first salesman, and pioneered the strategy of selling direct to the consumer, thereby cutting costs to be able to offer many incentives to buying the company’s products (which became numerous, a “laundry list,” pun happily intended, of household, food and other items). These incentives or “premiums” as they were called, were first small enough to be included with the customer’s order, until the idea was expanded to include the redemption of beautiful pieces of furniture, as well as pottery and glassware, lamps, bed frames and other items.

Below, a clipping from a Google search for Larkin & Co furniture:

Below, a clipping from an 1888 ad appearing in The Appleton Crescent, listing the bonus items one could get, along with 100 cakes of Sweet Home Soap. We’re wondering if any of the pictures mentioned titled, “Desdemona”, “Skye Terrier”, “Jockey Joe”, “Love’s Young Dream” etc. still grace any walls today. Then too, when we look at the artwork in the average working family’s home, as in….after gazing at our ancestor’s photo, then looking past them to see what was in those picture frames (if we can see, sometimes it’s just barely, and always to the point of wanting to jump in the photo for a moment)….we can imagine what might have been the humble soap origin of that prized piece of wall decor (as in our related post, The Village Belle.) 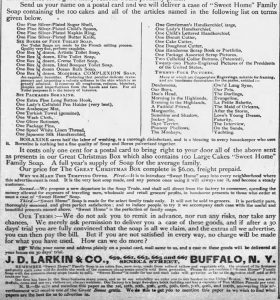 Below, a photo courtesy of the Buffalo Courier, May 29, 1904 of Larkin factory girls packing products (and if your ancestor worked in Buffalo for Larkin’s it’s rather nice to think that she might be one of these ladies.) Last thought:  Are those wreaths hanging on the pillars? 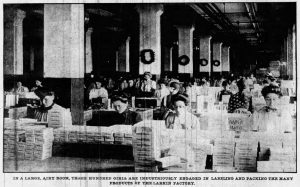