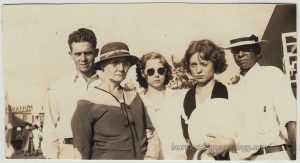 Continuing on with a mini-theme of families or groups of people. This one is a stumper. Where were they? The major clue, if we can call it that, appears on our left….something Ranch. Had the camera been pointing slightly more in that direction (or the photographer further back), we probably could have figured it out. Maybe “something-or-other Ranch” was a restaurant. Do we imagine we see a small outdoor dining table there covered in white cloth? The other clue (for some ingenious person) is the out-of-place looking geometric metal? phone booth-ish (space ship, time portal, 😉 ) thing at the far right, that we only see a portion of. What the heck was it? Then the people depicted here….Looking like, I hesitate to say it, a family of con-artists. Maybe it’s the younger girl – the stony-faced look and the cool octagonal sunglasses, note her grip on her grandma’s arm (yes, we remember that smiling into the camera was not mandatory, like it pretty much is today – refreshing, really – scowl if you want to) and her sister – with that trick of the eye – one eye closed, the other squinting slightly, not a wink though, but different….how did the camera catch that? Now, the dark-skinned gentleman on our right, is he the dad of the girls and the (nice-looking) older brother? Dad sun-bronzed from years of outside work…..or are they a wealthy bunch and this man is their driver (but part of the family) and native to (imagining) Central America. Well, idiotic questions like these are in abundance. Notice, too, how the whole gang is dressed in white except for the matron of the bunch. Makes you think this snapshot was taken in one of the southern states, Florida or southern Calfiornia, perhaps? Anyway, every picture tells a story, as they say, and what this one tells is……open to impression….flashes of insight appearing and disappearing…..in the end, I’d say they’re a nice, very stylish family with a million stories to tell. Oh, and this photo had been in the family album for some time, as evidenced by some of the black paper still stuck to the back.