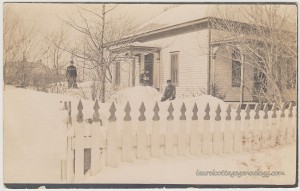 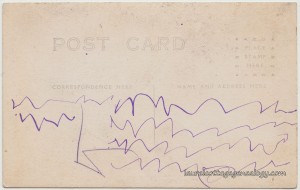 Another winter scene in an unknown location:  This Real Photo Postcard shows a house, guessing the style might be Folk Victorian with a four-square layout; note the spindle work or gingerbread trim and the decorative running piece, that we can just see part of, on top of the roof. An older woman standing on the front porch holds a little boy who is perhaps her grandson, and two men, perhaps the woman’s sons, pose a little off to each side. The house appears at an angle, and in the foreground a picket fence runs most of the way across the photo. The fence is painted white except for the tops of the pickets, which are either painted a darker color or left unpainted. It looks like this was by design to be able to find the fence when the snow piled up high.

The time-frame for this card would be about 1907, due to the divided back, through about 1918, due to the AZO stamp box with all four triangles pointing upward. Wonder if it was the boy in the photo who wrote on the back. Looks like he addressed the card to someone and with a short message on the left 😉 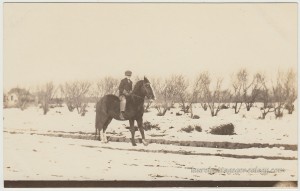 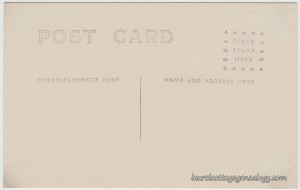 A happy young man out for a ride on his pony on a winter’s day. We see a house in the far distance, a row of small trees or bushes (maybe fruit trees) and in the foreground what appears to be wagon or buggy wheel ruts in the snow. The time-frame for the postcard is about 1907 – 1918 due to the AZO stamp box with all four triangles pointing up. 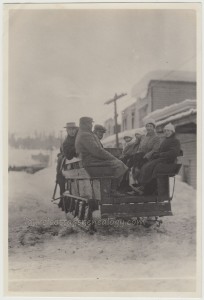 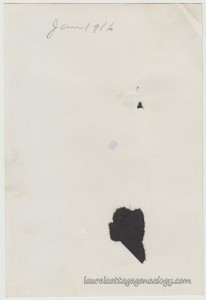 Winter fun one hundred years ago to the month!

It says “Jan 1916”  on the back of this wonderful black and white photo, which shows four ladies and three men (perhaps the driver jumped down to capture the moment) all bundled up for the weather with long overcoats and hats, riding in a horse or mule-drawn sleigh. The location is unknown; a small town probably somewhere in the U.S. When was the last time you went on a sleigh ride?

Robert G. Rasquin, is the printer and perhaps publisher, from the prior post Sledding In The New Year, whose copyright appears below. He was born September 1856 in New York of German born parents. He married Charlotte Read (possible alternate spelling) on December 28, 1881 in Kings County, NY. Charlotte was born June 1858 in New York; they had two children, Roland R. and Ethel J. Rasquin. Robert died January 4, 1917.

Census records and city directories show that Robert G. Rasquin made a living as a lithographer for most of his working life, from at least 1880 at about age 24 to about age 59 in 1915. The last city directory for him (1916) lists him as a secretary working for the printing and lithography firm Lutz & Sheinkman in NYC. For this approximate thirty-five year span, not many cards have surfaced. Besides the one we have, there is a whole Lollipop Series, with cute sayings and artwork of faces on lollipops. All the other postcards found online for him at this time, show the same design on the reverse. Below is the nice header portion. Note the thought that went into the design – how two subtle little waves, dipping below and jutting above, are fashioned into both of the far curving lines, reminding one of ironwork.

A not all-inclusive timeline:

1879 – Living at 188 Dean, Brooklyn. With brother Henry whose occupation is Lawyer. 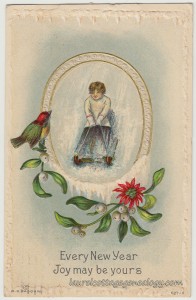 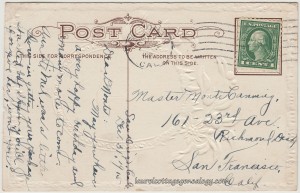 “Every New Year Joy may be yours”

Here’s a charmer, just over 100 years old, and continuing with our winter theme…showing a design of a little boy sledding downhill. A pretty steep hill at that! He appears in an oval frame with snow and icicles gathered at the bottom of the frame, and just underneath, some Christmas-y looking plants and a colorful bird, who is looking at the boy with interest. (Awww!)  Was thinking “snowberry” for the plant with the white berries. Probably not even a plant – but no, sure enough, that is exactly what that is. The red flower is likely representing a poinsettia, and the birdie…hmmm, artistic license? He’s got a finch or sparrow look and is green with a yellow belly and red cap. Maybe the artist was inspired by the Gouldian Finch. 😉 Love the icicles hanging from the top of the embossed border, too. There really was a lot of thought that went into these old postcards, not that we should be surprised by that. Note also how the artist has created the feeling of the snow flying up from the motion of the sled, and the pale blue portion of the background, the perfect color blue to fit with snow and ice.

R. G. Rasquin, the printer and/or publisher of this card, is Robert G. Rasquin.

“San Diego, Cal. Dec. 31, 1915. Dear Monte:  May you have a very happy birthday and many more to come. Auntie Mel was a little slow in getting your package started but I know you’ll forgive her, won’t you?”

Monte, born in January 1911 (so he was receiving this postcard for his 5th birthday) is Montgomery John Canning, son of Montgomery J. Canning and Louise E. Styles. He had an older sister, Leslie, born in 1909. The 1915 city directory for San Francisco shows Monte’s parents at the same address as the postcard and that Montgomery J. is in the car business under Canning & Vinton Auto Co. “automobiles, 453 Golden Gate Av.”

Below is a 1910 Canning & Vinton ad for their used autos. 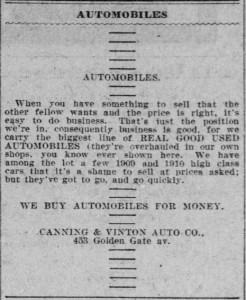 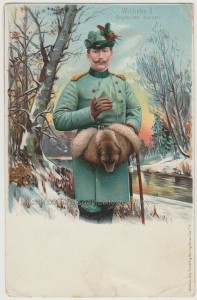 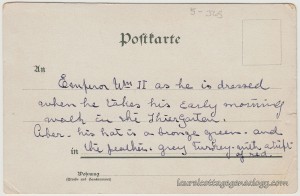 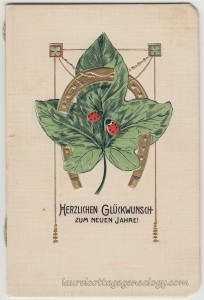 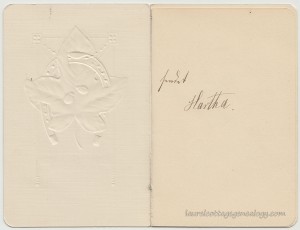 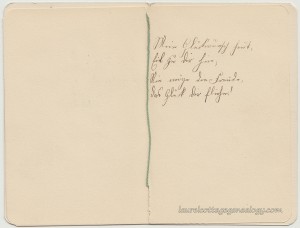 “Warm congratulations to the New Year!”

We’ve traveled to Germany to offer New Year’s wishes, albeit belatedly, with a beautiful little card bringing good luck. The design shows a leaf in green, secured by a golden horseshoe, and in the center of the leaf, two ladybugs; all framed by a golden cord fastened at the top ends by four-leaf clovers. The card appears to be signed on the inside and shows a message on the last page from the sender, but we need someone fluent in German to translate.

New Year’s Card in German, embossed on front cover. Circa 1900. 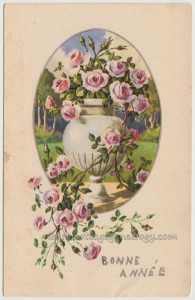 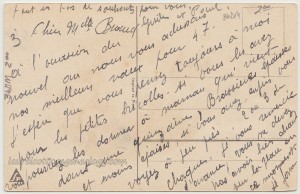 Here’s another for the new year, from France this time, and showing a very summery design of pink roses overflowing from a garden urn. The writing is difficult to read in places, and we’ll just translate the first two lines for now:   “Dear Miss Brouard [?], we send you our best New Year’s wishes for ’47. I hope that you always think of me for the little odds and ends [little jobs?] 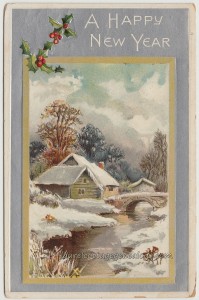 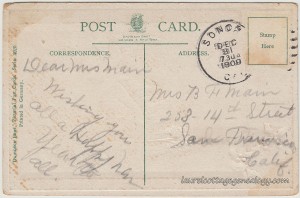 Yet another in the Ethel Main Collection, this one is from an anonymous sender who writes:

“Dear Mrs. Main. Wishing you all a Happy New Year to all.”

No doubt Mrs. Main knew who the card was from. Looking up Sonora, California…A historic gold mining town in the foothills of the Sierra Nevada range, and named in reference to the Mexican miners from Sonora, Mexico who settled the town in 1848. In 1910 it had a population of about 2,029. (The 2014 population shows about 4,802.) The name Sonora reminds me of two things:  one – that I’ve been through the town, or stopped briefly in it years ago, before the old postcard/photo/trade card love/obsession hit; I want to go back to visit to see what treasures await, and two – the line from the movie Wild Hearts Can’t Be Broken where I think it’s the hunky love interest that asks for the leading young lady’s name and she answers, “Sonora, Sonora Webster.”
Cool name, I thought, in admiring the character and actress (simultaneously, lol). Based on a true story…Check out this blog article from Horse and Man,  on the subject of horse/rider jumping from a high dive platform into a pool of water. Incredible!

Having veered way off track, but it’s always fun…the postcard front is a study in tones of silver, gold and copper of a winter scene of house, stone bridge and stream. The publisher is Davidson Brothers, of London and New York. According to Metropostcard.com they operated from about 1901 – 1911. 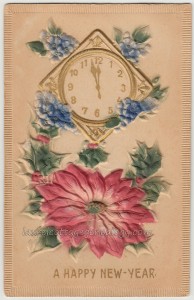 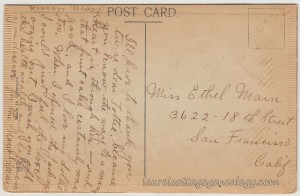 A heavily-embossed postcard of a poinsettia in a bed of holly and some forget-me-nots bordering a clock which is about to mark the new year. This card is from the Ethel Main Collection and kind of personal. Sounds like it’s from her man, and he sure appreciates her and the fruitcake she sent him. Addressed to:

As for the publisher, it’s one we’ve not seen yet. It appears to show the initials T – I – C on a banner running round a globe. 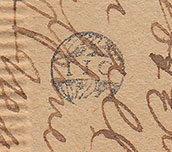