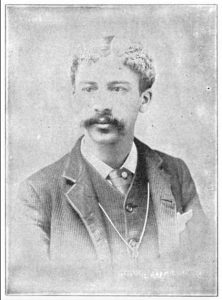 Edward W. Jackson, African-American, born in Georgia circa 1857, was the son of Alfred Jackson and wife Louisa. He died September 10, 1913 in Athens, Georgia.  Photo from James T. Haley’s compilation, Sparkling Gems of Race Knowledge Worth Reading, published in 1897. E. W. Jackson worked as a photographer in Key West, Orlando and Jacksonville, Florida, and was manager for a time for the Davis Photo Gallery in Jacksonville. See his Cabinet Card on this website for Willie Joseph Brennan.

E. W.’s short obituary below, referencing his well-known brother, was the key to finding out more:  A. P. Jackson was Albin P., born in Athens Georgia, two or three years younger than Edward. Albin’s unusual given name, helped greatly in locating the family in census records and thus determining that the E. was for (one would guess and be incorrect often, but in this case not – Edward. Most likely Edward was also born in Athens, Georgia. 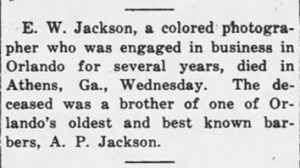 Below, a timeline gleaned from the usual sources – city directories, census, historical newspapers and Google books:

1880 Federal Census for Athens, age 23, working at a drug store. Father’s occupation whitewasher, mother, washer and ironer, brother Albin, barber, sister Bettie, washer and ironer and sister Judy, at school. Albin is about 3 years younger than Edward. Children’s and mother’s race listed as mulatto on this census, father’s as black.

1898 photographer in Orlando, per the dated cabinet card for young Willie Brennan, see link above.

1900 Federal Census for Key West Florida, 617 Whitehead St. Photographer, married about 1885, born May 1855 in GA. Wife, Eva W. is listed as having eight children, all living. No children listed for Edward and none living with the couple so, it’s possible the children are from a prior marriage for Eva.

1908 moved his photography studio from Orlando to Jacksonville, as reported to a weekly photography publication.

1910 Federal Census for Jacksonville, renting at 417 1/2 Broad St. Married but wife not with him on this census. Photographer at gallery.

Lastly, of note:  Edward’s brother Albin P. Jackson, was written up in a nice newspaper article, “Story of A. P. Jackson is one of Success” from the Orlando Evening Reporter-Star, November 12, 1914. Albin, the manager of the San Juan Barbershop in Orlando, had saved for he and his wife’s future, and bought an orange grove and a pecan grove.