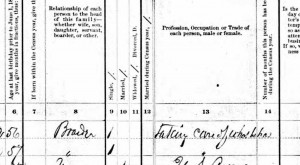 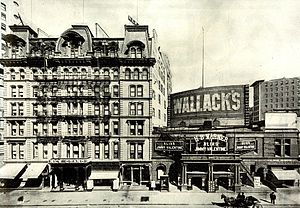 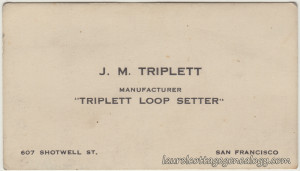 Well, the first question is – What is a loop setter? One might imagine it had something to do with textiles, but it is actually a term from the old movie industry. One of the entries under the heading of recently patented inventions in the Scientific American, published in 1914, is for Triplett’s Loop Setter:

“Loop Setter, – J. M. Triplett, 6 North Columbia St., Wenatchee, Washington. This invention relates to moving picture apparatus and provides means for setting the loop of the film without interfering with the operating of the machine. The mechanism is of a simple nature under the immediate control of the operator. It is adapted for use in connection with any standard moving picture machine.”

Wow, if you’d like to get sidetracked, look through this 1914 publication. There are articles, photos, advertisements, classified ads, and of course, other patent listings like the one above. The entry three up from this one is for a “torpedo steering mechanism.”

James M. Triplett married Anna A. Kreth in 1909 or 1910, according to the 1910 Federal Census for San Francisco. The interesting thing about this census is that James’ occupation is given as Baseball Player (currently employed). His name is not showing up in any online references for minor league players, though. Too bad, as that would be another very interesting line of research – what team he played on, etc. On the 1910, he and wife, Anna, are living with Anna’s mom, widowed head of household, Anna A. Kreth, and the widow Anna’s older daughter (the younger Anna’s sister) Aline (Caroline) Watson and Aline’s husband, Albert Watson. Aline and Albert are listed here respectively, as theater actress and actor. So, it would seem that James might have gotten his start in the movie film industry through his wife’s sister and brother-in-law. (No references were found for Aline and Albert Watson, but maybe they used stage names.)

James Triplett was born either in 1885 or ’86 (his WWI Draft Registration Card shows he gave 1886 as the year but the California Death Index shows ’85.) A Washington State Census for Kent in 1892, shows him with his parents and siblings. The 1900 Federal Census shows San Jose, CA with mother and some of the siblings, married brother as head of household. The 1910, 1920 and 1940 show San Francisco: the 1910 is mentioned above; the 1920 shows James and Anna with their two young daughters, James working as a machinist and owner of a stage manufacturing company, with them is Albert Watson and his wife Caroline (Aline), Albert is now listed as bookkeeper for stage manufacturing company, (so probably working for James); the 1940 shows James’ occupation as motion picture operator, with wife, Anna, their two daughters and Caroline (Aline) Watson, widowed. James was the son of Silas D. Triplett and Rebecca N. Mothersead (mother’s maiden name according to family trees on Ancestry.com)

Another reference to the Triplett Loop Setter is found online indicating:

“THE LAEMMLE FILM SERVICE, Minneapolis, U. S. A. NOW READY FOR DELIVERY “Triplett’s Loop Setter” For Power’s, Edison and Motiograph Machines. ALL MODELS. Do away with operators’ “Bugaboo” by installing “Trip- lett’s Loop …”

The above is found in The Moving Picture World, Vol. 22. This is full (and extremely long) text re the film industry in 1914. The full reference is in there somewhere but (good grief!) who has time to search for it? Like the Scientific American publication, this one from the film industry of it’s day is fascinating and diversionary, showing all kinds of film-related entries, including descriptions of the plots of movies, with great names like, “Hello Mabel”, “A Law Unto Herself”, “The Phantom Light”, “When Slippery Slim Met the Champion” and “The Family That Did Too Much For Nellie”. The description on this last one is, “How a family discovered that it didn’t pay to Doll Up the cook in Glad Rags.”