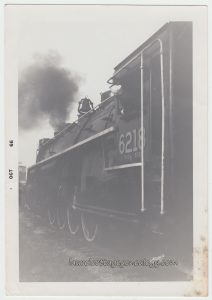 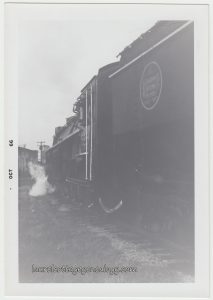 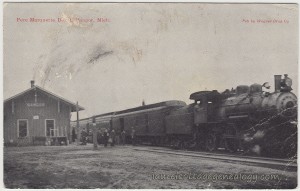 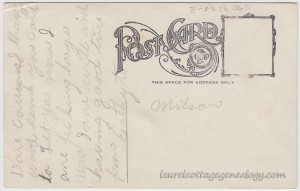 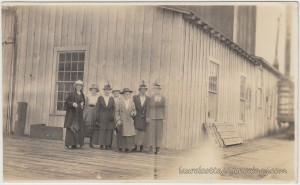 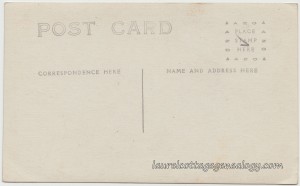 A blurry but interesting Real Photo Postcard that was marked  “Alaska”  on the little sticker on the plastic sleeve, showing a group of seven smiling ladies posing in front of what might be a wooden train depot or station of some type. That looks like a set of tracks on our right. All the ladies wear hats (nothing unusual) but three of the hats have an upright feather in the hatband. It looks like it’s summer or spring; they are dressed for mild weather, and there’s a couple of umbrellas in the group. Their skirt hemlines vary slightly above or below the ankle, except for that one daring lady in the back with the hemline just below the knee! The AZO stamp box with all four triangles pointing upward, and the fact that it’s a divided back, places the date at about 1907 – 1918. 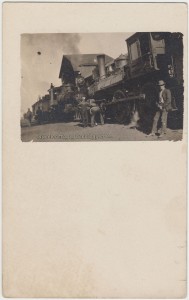 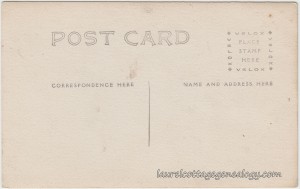 Here’s a really cool semi-candid Real Photo Postcard showing railroad workers at work, and a gentleman posed for the camera in the foreground, leaning against the train. It looks like they are at a rail stop, having just arrived or maybe getting ready to head out. Per the excellent Playles.com website, that we go to often for dates on RPPCs, the estimated time frame for this postcard would be 1907 – 1917. It has a Velox stamp box showing diamonds in each corner and “Place Stamp Here” in the center. 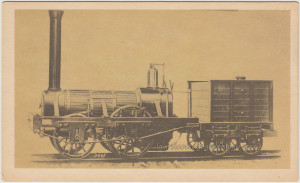 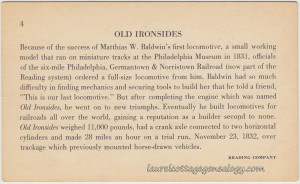