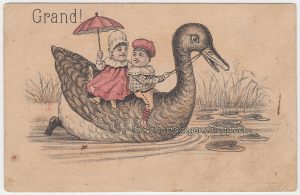 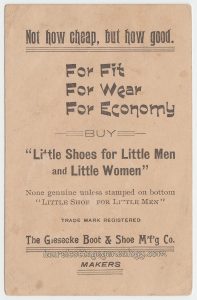 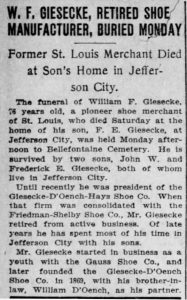 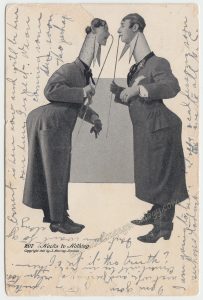 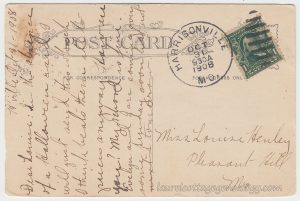 “H’ville Oct – 31 – 1908   Dear Louise:  In the absence of a Halloween card I will just send this which I think just beats them all to pieces anyway. How are you? My school is fine. Evelyn and I are coming over some Sunday soon but not tomorrow.”

On the front:   The sender’s comment to “Necks to Nothing” is  “Isn’t it the truth?”   regarding a comical, kind of grotesque image that makes fun of a couple of gents, with their exaggerated shirt collars, quizzing glasses and posteriors, the caption implying they have nothing much upstairs, above the neck.

Louise Henley is likely the Mary L. Henley that appears on the 1910 census in Pleasant Hill, MO. Born Missouri, about 1891; daughter of James and Ella Henley, and sister to James, Jr. and George……Sure enough, we find confirmation in Find A Grave, among other places. Mary Louise went by Louise, and she married Ucilious Calvert Sterquell.

The page below had likely been part of a publication on Lake County history or maybe German immigrants to Indiana. Per the writing on the back, it had been saved by a Scheunemann and Raasch descendant, until it later ended up at a paper fair, where we found it. 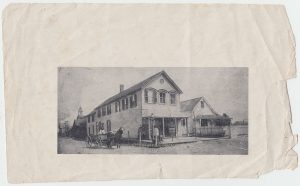 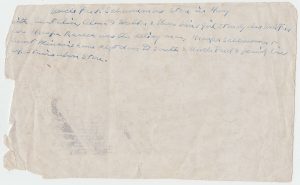 Cropped version below. The sign on the right in the photo is quite difficult to read, and we could be wrong, but the first two lines look like “Howe. U.S.”

Below, the 1880 Federal Census for Tolleston, Indiana (now part of Gary) shows Fred Schoeneman (Sheuneman) born 1830, his occupation listed as Extra Sand [?] something to do with the sand mining industry; his wife Wilhemina, born 1825; son Fritz, born 1855, working in general grocery store and bar; daughter Gusty, born 1860, clerk in store; son Richard, born 1863, works on railroad; and daughter Wilhelmine, born 1868, keeping house. All are stated to be from “Pommern” except for Wilhemine, born in Indiana. 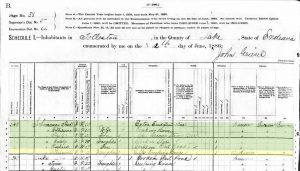 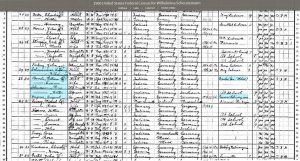 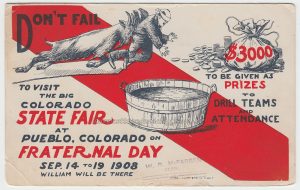 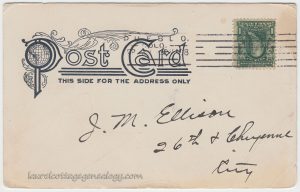 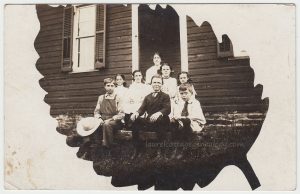 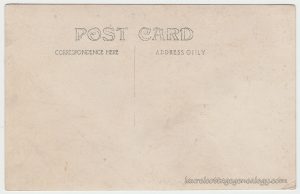 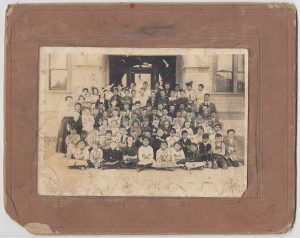 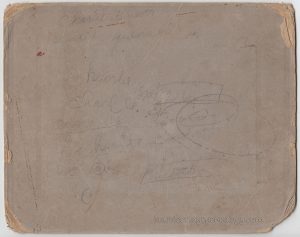 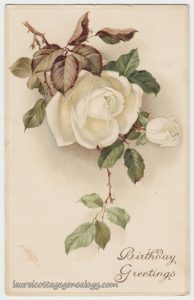 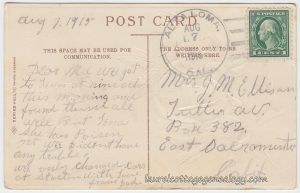 From the Alice Ellison Collection, this appears to be husband writing to wife; he writes:

“Aug 7, 1915. Dear Ma, wee got to Lena’s at nine oclock this morning and found them all well. But Lena she has Poisen yet. Wee dident have any troble. Wee only changed cars at Stockton. With Love from Dad.”

Yikes (!) on the “poison” if that’s what the sender meant, but maybe it was just that Lena was still sick.

The publisher logo on the back (the W inside the diamond) appears to belong to the F. W. Woolworth Co., New York, NY, the “Five & Dime” store or by my own era, just “dime store” (funny how these old terms creep up sometimes still, dime store, ice box…..) See Metropostcard’s website under W for more on Woolworth.

And lastly, the name of the avenue for the address is not showing up online, maybe Fifteenth? even though that’s quite a stretch when looking at the writing. 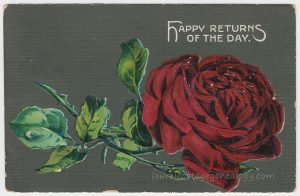 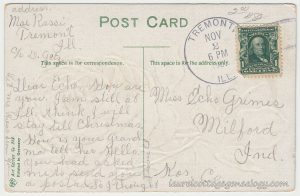 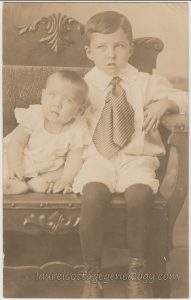 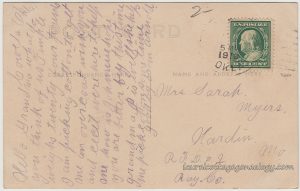 “Coweta Okla.  Hello Grandma what do you think of us. Temple weighs twenty four pounds. I am picking cotton to get me an overcoat wish you and Cecil were here to help me how is Johnnie hope you are better by this time. Grandma P is well she helps me pick cotton some time. good by from Arnold.”

The addressee, Mrs. Sarah Myers, was found in the 1910 Federal Census for Crooked River Township, Ray County. She is widowed, born in Missouri about 1847, living with her son John, his wife Anna, and their children, Curtis, Daniel and Cecil. Cecil is about six years old at this time so is about the same age as his cousin Arnold. Johnnie, mentioned on the card, must be Arnold’s uncle Johnnie.

Sarah Jane’s maiden name is Weldy per Findagrave, and spouse was Joseph Young Myers. Temple and Arnold, surprisingly, were not found in records, and it’s possible these were middle names for them, and possible that Sarah and Joseph could have had a daughter born and married between census records, who married someone with the last name starting with “P.” (per the “Grandma P” reference in the postcard.) 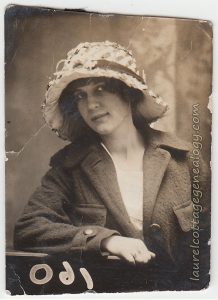 A mini-photo of a beautiful dark-haired girl in winter-ish coat and spring hat. The writing on the back, in pencil, had been almost completely covered with black photo album paper (you know the type) but we discovered that applying water softens the paper so that it can be peeled and scraped off. Oh, and then Googled the “how to” question and saw that yep, it works on the old photos with writing underneath (in pencil, the source wasn’t sure about ink) because, after all, the photo would have been dipped in water before being hung to dry. (It would have eased my mind to have read this first, but still!) Anyway, she’s very photogenic, with that arresting look. And, oh what a hat! Straw and fabric or just fabric maybe, but the shape, along with the subtle pleats on the underside, reminds one of a flower. As to the writing:  What we can make out says,  “Jenevieve….” with something underneath that we can’t make out, and next, our best guess “Bank Inspector.” (Well, inspector misspelled. Plenty of entries were found under this given name cross-referenced with occupation.) And at the bottom right corner, maybe  ” H. C. MO.” Hmmm, one of the counties in Missouri that begins with “H” or maybe an abbreviated company name? And if she was not a bank inspector, well, we hope she’s laughing somewhere at this, but it does sound very dramatic, doesn’t it? Jenevieve, Bank Inspector!