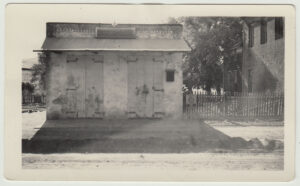 This building is on the National Register of Historic Places and is the smallest Masonic Hall in California. Built by Italian stonemasons from local schist rock in 1855, it enjoyed a variety of uses until it was purchased by the Freemasons in 1873, and renovated and first opened for meetings in early 1875. The “F & AM” in the Lodge’s sign, if you can read it, is a Masonic term and stands for “Free and Accepted Masons.”

The other sign (which we can’t read) to our right of the building shows a pickaxe. The Hornitos area was an important part of the California Gold Rush, so this sign may have been some type of historical marker.

“AF and AM versus F and AM States.” masoniclodgeofeducation.com. (Accessed September 18, 2022). 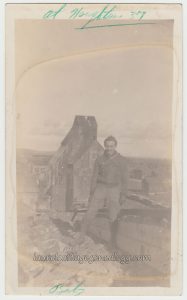 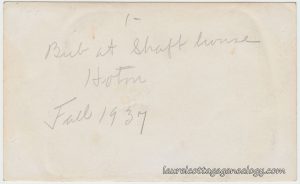 Another for Copper Country….

Just when I was about to give up looking for a match for this mine shaft, I came across an old photo and postcard. See Mindat’s No. 1 Shaft, Isle Royale Mine. True, the structure showing in that photo is too far in the background to pick out much beyond its outline, but that, along with the old postcard captioned,  “Houghton Mich., Rock House, Isle Royal Mine”  (appearing twice in the Google image search, below) seems to verify the i.d. of the mine, or if not verify, then drive up really close to it 😉 verification-wise, that is. Bear in mind that the postcard was colored, and also (per its reverse) was printed in Germany, for sale in the U. S., so circa 1907 – 1914, and our photo is from 1937, so there could have been some changes by the latter date, then too, any difference we might perceive could be due to the different angle. (i.e. where’s the chimney on the structure on the far left?)

On some last notes….

“Bub” wasn’t found in records, but it’s always worth a quick search; sometimes one gets lucky. And….what was set on top of our photo (or what was it set in) to give it the odd, sort of interior frame? The shape looks familiar, like we could just put our finger on it, but not quite. 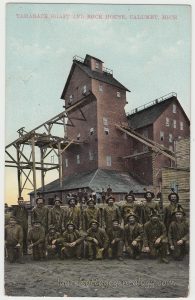 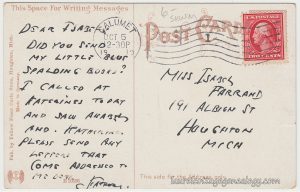 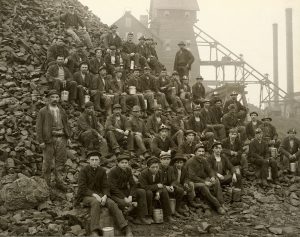