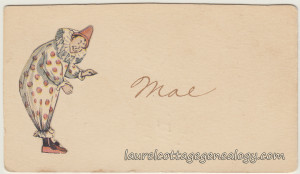 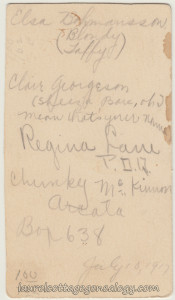 It looks like this very cute calling card might have been hand made by or for Mae. It has the owner’s name written on it with a drawing of a clown in polka dots that was cut out and pasted on, and we can see that the clown was thoughtfully chosen, since his bowing pose with hands extended, perfectly fits for the presentation of the owner’s name. The back is charming and humorous and maybe a little politically incorrect. On the back, in pencil, are written the names and nicknames of Mae’s friends. Elsa Bohmansson was called Blondy or Taffy. After Clair Georgeson, someone (probably Mae) wrote, “(She is a bare, oh I mean that’s your name)”. (Isn’t this always the way, when you are trying to stick to a format and you flub it.) We then have Regina Lane, who was called P.D.Q. and last but not least Chunky McKinnon, with his or her address of Arcata, Box 638. The card is dated at the bottom July 10, 1917. After much research, it was found that in 1917, the ages for the friends were between about 14 and 19.

Elsa Bohmannson is listed in the city directories in Eureka, California and there are two photos of her in the school yearbook “The Sequoia” for Eureka High in 1916. She played tennis and basketball. She is also on the 1930 Federal Census in Eureka, living with her widowed father, Robert H. Bohmannson, born in Sweden. He is a druggist, and the 1930 shows Elsa working at the drug store as a stenographer. The California Death Index shows Elsa was born November 13, 1897 and died December 1, 1992, both in California.

“Chunky” McKinnon (too bad we don’t know the first name) could have been Wilfred C. McKinnon, born California about 1900, son of George W. and Anna L. McKinnon. The family is living in Arcata, Humbolt County per the 1920 Federal Census.

As for Mae, there are multiple possibilities:  There are separate entries in the census’ records for Mae Falor (or Falon?), Allen and Smith, which may or may not be for Mae (no pun intended.) Or Mae may have been short for something. Mabel Davis or Mayo Hamilton (Mayo – love these unusual names) appear with Elsa Bohmansson in the “Sequoia” the Eureka High school year book in 1916.

This card was interesting to research. I had pictured a group of giggling and adorable girls, maybe age ten or twelve (although true, the writing does look mature) making calling cards for themselves. But of course, after the research that impression changed to one of a group of high school friends, maybe even with the thought in mind that they wanted to keep in touch, as some of them had or would be graduating. Not that these impressions matter but it made me think:  Imagine what nutty and probably incorrect things someone would think about us – almost one hundred years later after seeing something we’ve written on.