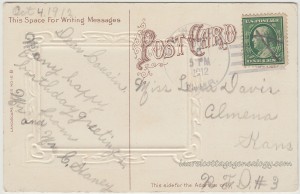 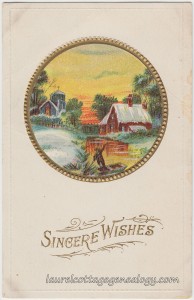 This one is part of what I’m starting to think of as the E. Nash and pre – E. Nash publisher mystery. E. Nash was a postcard publisher about whom not much is known. Oh boy, one of those type. 😉 So, the next posting after this will be an organization of what we have so far for Nash and the possible prior publisher. They both used the same beautiful spiral design in the back header, but Nash used a capital “N” in a triangle for his logo and the prior person used a capital or two capital “A”s in a circle. The publisher logo on this card shows a subtle variation in the circle.

Anyway, this beauty shows a nice winter scene at sunset or sunrise, of a guy in a skiff (easy to miss unless you click on the image to enlarge. You can click again to enlarge one more time.) He is using the skiff’s pole to navigate the little stream, and in the background on the right is (presumably!) his house and on the left, across the stream (very handy) the church he attends (again presumably 😉 ). This is another addressed to Lena Davis of Almeria, Kansas and is from Lena’s cousin, Sophia Hubbard. Sophia writes:

“Pomona Kans.  Oct. 7 – 1913. Dear Cousin Lena. Papa is out west. Has been gone a week to-day and we haven’t heard a line. We are worried almost to death. The baby has the grippe. It has rained twice since he left. I came home last Mon. night. wk. ago. Was glad to get yours & Lillies cards they were all I got. We got a letter from Aunt Katie. They have moved. Wish you a very Happy Birthday. Sophia Hubbard.   Will write you a letter just as soon as I know any thing for sure.”

Yikes! We hope everything turned out fine for Sophia and her family. There are more postcards that we’ll be adding later on to the Lena Davis Collection, so we’ll sort out the different family relations at that time.

Divided back, embossed postcard. Unused with writing. Dated October 7, 1913. Publisher unknown. Possible E. Nash connection. Nash may have obtained the rights to the postcard back header from this unknown publisher. 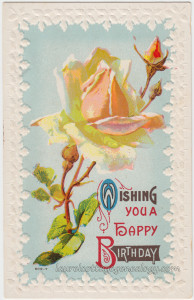 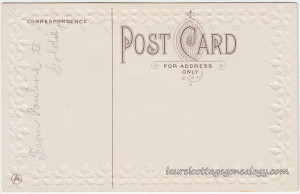 Divided back, embossed, unused with writing postcard. Series or number 609 – 7. Publisher or printer logo is 2 capital “A”s  – one larger than the other, in a circle. Circa 1910.

Pretty colors on this one and nice lettering showing “Wishing You A Happy Birthday.” Yellow rose with buds on a light blue background with a very nice embossed border of white leaves. The back shows,  “From Pauline to Goldie.”

The very distinctive post card heading on the back – with the sort of spiral staircase design around the “C” is seen both with the publisher or printer logo that we have here – one or two “A”s inside a circle – and also seen on postcards by publisher E. Nash with the copyright symbol and “N” inside a triangle. On the Nash cards that I’ve seen using the spiral design, “Copyright E. Nash” is printed on the outside left of the spiral. The question is did Nash maybe buy out whoever was publishing or printing under the “A” in circle logo? I have a Nash one dated 1913 and an “A” in circle one dated 1910. These examples will be posted next.