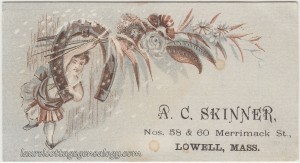 This is either a trade card or calling card or maybe a combination of both. A. C. Skinner ran a “fancy goods” store at the address given on this card:  Numbers 58 & 60 Merrimack St. in Lowell, Massachusetts. And the card shows a beautiful little design of a petite lady or elf, holding a few branches with various flowers and leaves; because of the copper and light blue-gray colors of the card they almost appear to be a dried flower arrangement. It’s sort of an awkward pose for the little elf, holding onto a horseshoe (which hangs from a nail) with one arm, and with the other outstretched above her head to display the flowers, and it’s snowing. A somewhat unexpected illustration and ever so charming.

The long-time Lowell department store Bon Marché which operated from 1878 – 1976, had an early connection with A. C. Skinner. Bon Marché’s founder, Frederick Mitchell, once worked for A. C. Skinner.