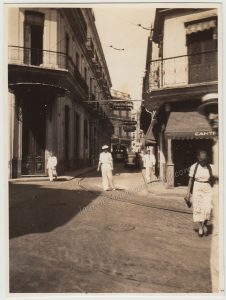 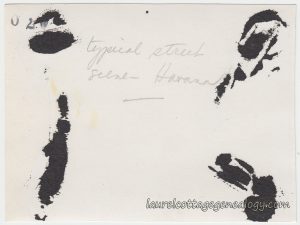 The street name is unknown, but this is a wonderful glimpse back in time, circa 1920s Havana. Note the cobblestone street, streetcar, the rear-view of the smaller vehicle of the rubber-tired variety 😉  the beautiful wrought iron railings, the very tall double doors on the corner building on our left, and the people going about their day. Funny that everyone in the photo, except for those appearing in the extreme background, are facing us. Check out the guy partially in our view on the far right. He’s easy to miss!

We’re not seeing Havana city directories for this time-period online at present, though maybe someone will post a comment which will help pinpoint the street, but in any case, the most prominent business sign in the photo shows:   “Evaristo Tanda – Fabricante de Gorras”  translating as “Evaristo Tanda – Manufacturer of Caps.”  Evaristo was born in Spain about 1885. He appears on several ship passenger lists; the 1915 and 1917 record that he was single, occupation Merchant, and reveal that he had cousins, Angel and Francisco Puentes, in Matanzas, Cuba (could be city or province) the city being located on the northern coast of Cuba (about an hour and a half east from Havana, in present-day drive time.)

The 1917 passenger list for Evaristo Tanda and others, records their arrival from Cuba to New York, on Morro Castle. Research shows this was likely the passenger steamer built October 1900, original owner NY & Cuba Mail, which was scrapped in 1926, definitely not to be confused with the ship whose name became well-known (at least at that time) after the terrible 1934  Morro Castle tragedy, in which that vessel was destroyed by fire under mysterious circumstances which resulted in the loss of 137 members (accounts vary) of passenger and crew.

Below, Evaristo Tanda’s 1917 arrival in New York from Cuba on the earlier steamer Morro Castle: 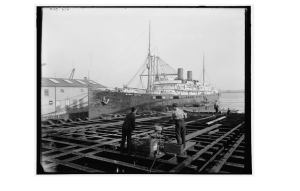 Below, Evaristo’s arrival in Key West, Florida on steamer Cuba in 1925. 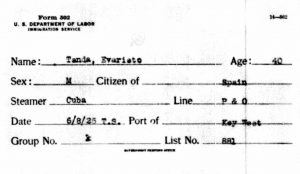