Here’s a wonderful set of six Real Photo Postcards, taken from 1904 to 1910, showing William S. Cox, his son Frank E. Cox, Frank’s daughter and William’s granddaughter Madola E. Cox, and Madola’s two kitty cats, Tabby and Tiny. The photos were very likely all taken in Otselic, Chenango County, New York. (The records that we’ve looked at here are just a partial foray into the Cox family, and not meant to represent the full picture of all siblings, marriages, parents, etc.)

The 1905 New York State Census for Otselic shows William S. Cox, about age 84, retired farmer; living with him are his daughter Minerva M. Tallett, about age 53, keeping house, and granddaughter Grace Kenyon, about age 21, clerk in a dry goods store. The same census, a few pages later, shows Frank E. Cox, about age 49, wife Mamie, about age 30, daughters Cammilla, about age 14, and Madola, about age 4. Frank is employed at a drug store. The 1910 Federal Census for Otselic shows Frank, Mamie and Madola, with Frank’s occupation as bank cashier. William S. Cox is several entries down on the same page, with daughter Minerva Tallett. 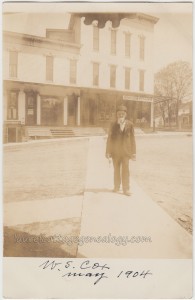 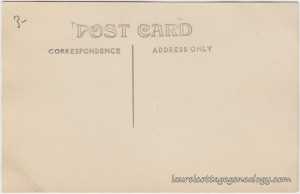 A smiling W. S. Cox, crossing the street, May 1904. This must have been taken in Otselic, New York, according to the grocery and hardware store sign with proprietor name George B. Angell that we see in the background. George B. Angell is found on the 1900 Federal Census for Otselic, with his wife Nettie P., sons Earl J., F. B. and Cyril B. and niece Louise Pudney. George’s occupation is listed as general merchant. Other things to note in the photo are the Meat-Market sign on the far left, the dirt streets with what looks like a concrete crosswalk that W. S. is using, and what appears to be a concrete sidewalk meeting the crosswalk. I don’t know what the dark wavy image is at the top of the photo, but it looks more like something that happened in the photo process, rather than part of an awning or some other item. William S. Cox would have been 83 years old in this photo. 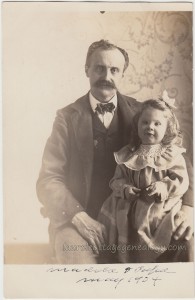 Madola & Papa, May 1904. The son and granddaughter of William S. Cox:  Frank E. Cox, and his daughter Madola E. Cox. A beautiful father-daughter photo, showing Frank in suit with vest and bow tie, Madola seated on his knee, in long-sleeved dress with large frilly collar with lace, and wearing a hair bow. 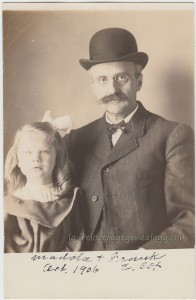 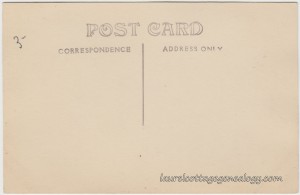 Madola & Frank E. Cox, Oct. 1906.
Another beautiful father-daughter photo:  In this one Frank Cox wears his derby hat and wire-rim spectacles, and his suit jacket buttoned at the top button just below the lapels. Madola is dressed in similar fashion to the prior photo, high-necked dress, darker in color this time, with large collar and again wearing a hair bow. 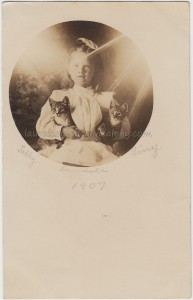 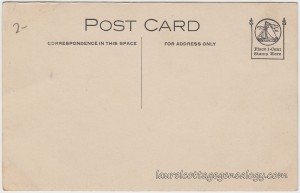 Tabby – Madola – Tiny – 1907.
A lovely round photo with a special lighting effect of “sun rays” shining on Madola and her two charges, Tabby and Tiny, that she holds, one in each arm. Beautiful Madola is very grown-up looking, and all three adorable subjects are posed just right. Love how the kitties are both looking in the same direction, and there is no blurriness. The stamp box on the back of this one shows the sailboat logo, and it’s nice to find this logo substantiated by the date of 1907 on the front, as very little is known about this company. 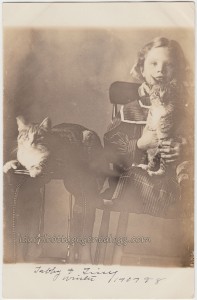 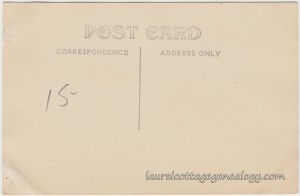 Tabby & Tiny (& Madola) Winter 1907 – ’08.
A posed but less formal photo than the prior. Madola, seated in a child’s wooden chair, holding Tiny in her lap, and Tabby (understandably a little blurry) draped on top of a small table just next to them. 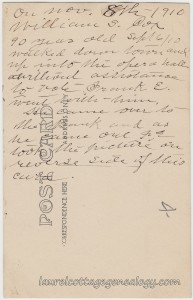 “On Nov. 8th – 1910 William S. Cox 90 years old Sept. 6 ’10 walked down town and up into the opera hall without assistance to vote. Frank E. went with him. He came over to the Bank and as he came over F. E. took the picture on reverse side of this card.”

Thank you to whoever recorded the detailed description on the back. (Wouldn’t it be great if all photos had detailed writing on the reverse side like this one?) Was the recorder the smiling woman with the charming head scarf tied in a bow under her chin, that we see through the long glass door window? There is also an inscription at the bottom of the photo in white that was put in during processing. It is:  “Election Day 1910 and I voted.”
The composition of this one is just beautiful:  W. S. in his dark coat, hat, cane, contrasting with his white beard, the overall white “shabby chic” appearance of the building behind him – the wooden post, the beautiful double doors with the long glass windows, the grid-looking window above the doors, and the darker reflections of the windows, the white scarf of the lady in the bank building….This photo happens to be going up timely, as election day is coming up soon.