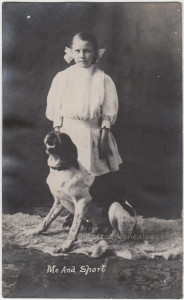 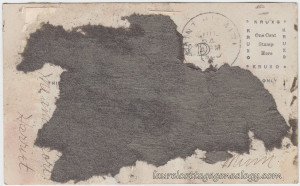 Real Photo Postcard with caption  “Me And Sport”  of a little girl, maybe about ten years old, posing for the camera with her dog. The dog appears to have been caught in the middle of a bark (!) and looks to be some type of short-haired hunting dog. Sport is seated and the is girl standing behind him; both are on some type of animal skin which has been placed over a carpet. When we turn over the card we see that it was taken out of a scrapbook or photo album; most of the black album paper covers the card, but we can make out that it was signed by Harriet, and it was sent to somewhere in Minnesota. It seems likely then that it is Harriet in the photo.

The year of the postmark is hard to read; it looks like 1920-something. This style of Kruxo stamp box is from circa 1908 – 1920s. We can see that the card was postmarked in Saint Hilaire, Minnesota, which is a city in River Falls Township, Pennington County, and located in the northwestern part of the state. Too bad we don’t have a last name for Harriet, as there are maybe three or four possibilities showing up in census records, if we presume that she lived in the River Falls Township area. We can see from the wavy appearance of the photo that the postcard may have gotten a little wet at some point, although there is no musty odor detected at all.