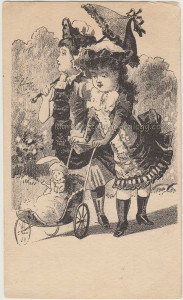 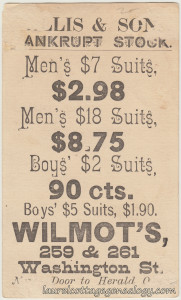 Wilmot’s, at the time this trade card was printed, was located at 259 and 261 Washington Street; this was next door to the location for the newspaper publication the Boston Herald; the Herald’s address being part of Washington Street’s “Newspaper Row.” It looks like this card was saved for the charming image on the front, since it had been, in all likelihood, glued in a scrapbook; it’s removal from which caused the print to be missing in the four corners. This makes the full company name, that would have appeared at the top, hard to figure out, as there are definitely more than a few possible letter combinations. But whoever they were, they had the misfortune to have needed to declare bankruptcy, and Wilmot’s must have bought part or all of their remaining stock. Imagine buying a man’s suit for as low as $2.98 and boy’s suit for as low as 90 cents! (I know, inflation, inflation, but a 90-cent suit is just so funny-sounding.) The Herald’s six-story structure was built in 1877-1878, and their address was 255 Washington Street in Boston. Though the prior location for the Herald had been in close proximity to their new address, it’s more likely that, at the time this card was printed, Wilmot’s was located next door to the Herald’s more recent one at 255 Washington St. The Herald’s address is a great help in dating the card, but we find that we can narrow it down a little further below.

It turns out that Wilmot’s got it’s name from owner H. B. Wilmot. Below shows the full page ad from an 1872 Cambridge city directory showing the business name as H. B. Wilmot & Co. An earlier 1870 Boston directory shows the same name and address. Other years (1880-1886) show addresses in Salem, Lynn, Lawrence and Taunton. In the 1885 Boston, under Wholesale Clothing, we see the 261 Washington St. address, so this trade card is likely from this year or close to it. Manager names Joseph W. Rice (Lawrence 1881), J. F. Boynton (Salem 1880) and H. C. Reed (Taunton 1881) also show in directories under Wilmot’s, so it looks like there were several locations running at one time. And from at least 1884-1913, H. B. Wilmot had a summer home in Gloucester, with the latter part of those years, showing a regular residence in Somerville, outside of Boston. It seems, from looking at all these city directories, that H. B. Wilmot had a very successful career in the clothing business. 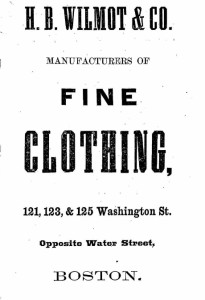 I suppose this is a lithograph though I am really not sure. But as far as the wonderful artwork we see here: Was the image supposed to be of two ladies, one of whom pushes a baby in a carriage, or is it an image of two little girls, dressed in adult-like fashion, one of whom pushes their dolly in a carriage? From the short hemlines we see here, I would guess that these two are little girls, otherwise it would seem that the hems would have been at, or much closer to, the ground. I love the way we see the profile of the girl on the left (love the parasol) who gazes dreamily off into the distance; contrasting to the girl on the right, contentedly pushing the carriage and concentrating on the path ahead.