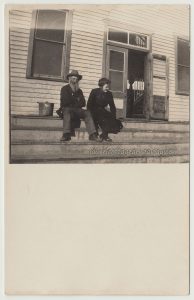 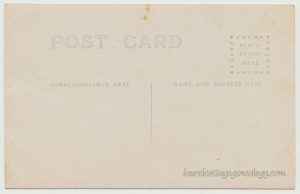 According to the particular VELOX stamp box on the reverse, this would have been taken around 1907 to 1917. The building the steps lead up to is not a house, but maybe rather a grange hall, a train depot, a hotel. Note the metal screening on the windows, and the possibility of various small signs (enlarge the image twice – see the nails?) that had once been posted to our left of the doorway. But, I was drawn to this postcard from my impression of two people, caught in a great, candid moment of laughter – the woman seems to be, doubled over would be overstating it, but how do you describe, when someone says something unexpected, maybe ridiculous, and you have that reaction, turning off to the side in mirth, a little bent at the waist? The gentleman’s pose is in wonderful contrast, with arms folded, looking into the camera. In close up view, we can’t really tell if he’s laughing, but we’re taking in the working clothes, the heavy gloves, the dried mud on his boots (he’s probably listed as a farmer on the 1900 and 1910 census), and of course, the metal bucket to his right.