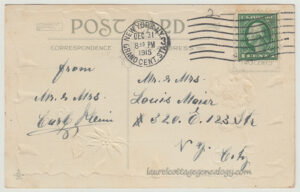 Is Here To Stay.”

A few possibilities show up for Louis Maier around this time, but oddly, nothing with the above address, not even under a different name. And Carl Klein is a common name in New York City, so, there’s no way to track him either.

A charming card – that of boy in snowshoes and winter outfit, carrying a beautifully-flowered lantern and bringing some mistletoe – one assumes maybe this was a Scandinavian tradition, but we couldn’t find confirmation of this idea. Maybe, just in general, the lantern’s bringing light for the New Year. The embossing is quite nice, too – the whole scene coming to us on some rough-edged “parchment” with a poinsettia “attached.”