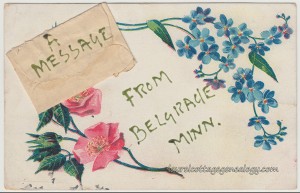 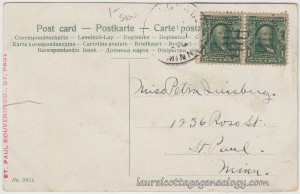 Petra was not found in online records, and various spellings of the last name were tried, as well as a general Ancestry searches under just the address, just the first name, just the last name. (Pretty unusual to not find something.) And though the street name looks like Roso, the only street name that verifies with this number, in St. Paul, is Ross. The postmarked date is unreadable, and at first glance we notice that there are two one-cent stamps, which might lead one to think this was sent around 1917 – 1918, when there was a higher rate in effect due to WWI. However, it’s more likely that the sender just added an additional stamp as a precaution to make sure it got there, since there was an additional bit of weight to the card, in the form of the little envelope attached. Was there actually a message in there? I like to think so, and that would support the extra weight-additional stamp theory. Similar cards from the same publisher have been found for sale online dated around 1908. The St. Paul Souvenir Co. appears to have operated from about 1907 to 1910 or ’11. A Google book search comes up with a C. Hamm for the possible proprietor. We’ll explore more on the publisher in the next post.