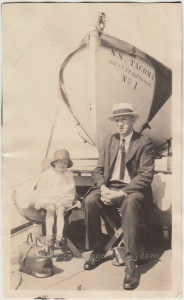 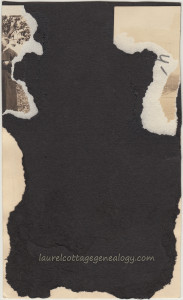 This is the second photo that, as previously mentioned, likely came from the same unknown family photo album. (See post entitled Onboard The S.S. Alameda.) Perhaps this is grandfather and granddaughter or father and daughter, posing in front of lifeboat number 1, and perhaps these are the same two people that we see on the back of the Tacoma photo. In trying to date this one, we notice that this photo (like the other) has a white border, we see that the little girl is wearing a dress with bloomers, a cloche hat, the man’s suit lapels are rather wide, we notice his hat, the width of his tie, and of course we will look at when this steamship was in operation. The photo caught the little girl (as so often happens to us all, thank goodness now for digital) with eyes closed, and we see other details like it looks like the man has a pencil in his suit pocket, and is that a binoculars case behind his feet? Was the bag on the left for general traveling purposes or was he a businessman and this was a type of briefcase?

The back shows the partial photos of a person who appears to be an older woman, and of a lawn in front of some steps leading up to a building, with the image of the building being very faded. (Wouldn’t it be hilarious if someone recognized this building?)

The S.S. Tacoma, owned by the Puget Sound Navigation Company, was in service between 1913 – 1938 and was known as one of the best-designed and fastest vessels to operate on Puget Sound. She was built of steel, weighed 836 tons, was 209 feet in length, and operated by a steam engine, single propeller. Her speed exceeded the initial expectation of 19 knots, and was timed as high as 21.5 knots. 1913 – 1930 saw her high speed service between the Washington cities of Tacoma and Seattle, but better roads and increased vehicle traffic between the two cities led to the termination of the marine service, and on December 15, 1930 Tacoma made her last regular run. She was still used for occasional excursions between Seattle, Washington and Victoria, British Columbia up until 1938 when she was sold for scrap (always sad to read these types of things) along with some other vessels. (Wikipedia)

As to the date of the photo, one apparently can spend years (kidding, and this is nothing new) searching styles of clothing, hats and shoes. The man’s hat most closely resembles a boater, but it doesn’t necessarily appear to be made from straw. The suit lapels and tie were a little hard to pin down for year. Examples of little girl’s dresses with bloomers were found for the 1920s…In all probability this photo is from the 1920s, especially since the steamer’s regular service stopped at the end of 1930. Some great photos of Tacoma can be found at the second source listed below.