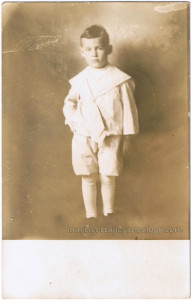 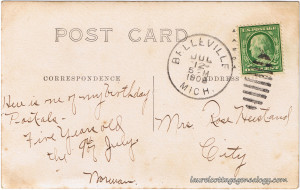 “Here is one of my birthday Postals – Five Years old the 9th of July, Norman.”

The city is not specified for the addressee but perhaps it was assumed by all to be Detroit. Belleville, established in 1905, is a small town about 29 miles southwest of Detroit. Though Norman’s last name is not given on the postcard, I believe it is Cutler. Norman Cutler, age 5, appears on the 1910 Federal Census for Van Buren Township, Wayne County, Michigan. The village of Belleville was included as part of Van Buren Township on this census. This is the only Norman on this census, and the age fits, and the SSDI online record shows Norman Cutler with the same date of birth given on the postcard of July 9, 1904. The 1910 census was enumerated on May 4, 1910, so age 5 at last birthday, fits exactly:  since he was born in 1904, he would have been turning 6 in 1910. From the census, his parents are Charles and Dora Cutler, both born in Michigan. Charles’ occupation is farmer, and living with them is housekeeper, Pearl Thompson. By 1920 the Cutler family has moved to Detroit; Charles’ occupation appears to be paperhanger at a store; living with them are several boarders; and most importantly, they have added another member:  daughter, Selma, (and of course younger sister to Norman.)

As for Rose Heistand, it turns out she would be harder to try to locate; she is not showing up in some quick searches for Detroit and environs and there are too many possibilities under this name in various states.