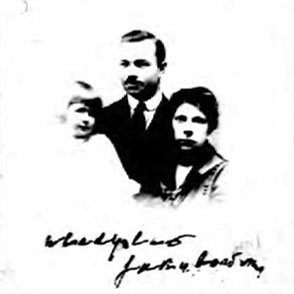 The photographer for the prior post, Władyslaw L. Jakubowski, was born July 12th or 22nd (22nd from his WWII Draft Registration), 1883 in Filipów, Suwałki County, northeastern Poland, son of Vitalis Jakubowski and Anna Szpakouska[?] He emigrated to the U.S. in 1903 and became a naturalized citizen in 1911. He married Wanda Gudowski (Kudowska on marriage record) in Detroit on August 25, 1915. By the 1920 Federal Census they had a daughter, Sophie. Jumping ahead to 1940, we find Władyslaw and Wanda in Queens, New York. He’s working as a printing machine operator. With them are son, Marion, born in Poland, about 1923, and daughter Alina, born New York, about 1931. The WWII Draft Registration shows Władyslaw working at Grand Prospect Hall, 263 Prospect Ave., Brooklyn. To fill in some of the time frame and view more photo examples, see Michigan Polonia, which includes the publication Portrait Studios of Detroit’s Polonia: The Face of Polish Immigration, (pages 26 – 28).

Władyslaw Jakubowski is shown in several Detroit city directory listings at his studio address of 1525 Michigan Avenue, but the 1912 entry under his partner, Władimer Lityński, gives us a little more information: 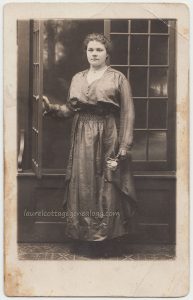 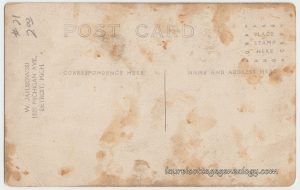 A Real Photo Postcard, not in good shape, as you can see by the “foxing” marks and the creases, most notably in the top right corner. More by Władyslaw Jakubowski can be viewed at Michigan Polonia and Polish Mission. His stamp on the back shows:

And it’s a beautiful image of the lovely young woman, whom we might presume to be of Polish descent, posed standing with one hand resting on an open French window, and holding a rose in the other. Her dress (or matching skirt and blouse) is possibly silk (wonder what color) with long sleeves of a see-through material. She wears a white lace fichu (or maybe a long-sleeved white blouse underneath) over which lays a cross on a choker-length chain, and a large-link bracelet on her left wrist.