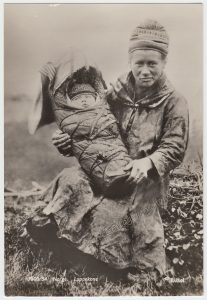 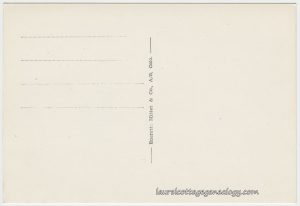 The translation for the publisher’s description is just “Norway. Lapp wife” so we added med barn (with child) to the title to be correct for the view. And this is the perfect postcard for being (1.) the third in a short Norwegian theme (see prior two posts) and (2.) the first for Mother’s Day, this year.

A little about the publisher

Mittet & Co., A/S was started in 1899 by Ingebrigt Mittet (1875 – 1950) and carried on and expanded by his sons Knut and Søren Mittet. It was a major Norwegian publishing firm and produced thousands of postcards as well as books and art literature. It appears to have been sold in 1987, but in the 1950s about 15,000 to 20,000 negatives and some albums were sent to the Riksantikvaren (Norwegian Directorate for Cultural Heritage) some of which then went to the Norwegian Folk Museum and Norwegian Technical Museum. The National Library took over the Mittet archived material in 2007. A/S is the abbreviation for Aksjeselskap, the Norwegian term for a stock-based company.

The indigenous Lapp people, Laplanders and People of the Reindeer, as the terms Westerners have traditionally known them by, are today referred to as the Sami, also spelled Saami or Sámi. They live in the region called Sápmi:  northern Sweden, Norway, Finland and the Kola Peninsula of Russia. And, we’ll not try to summarize further but instead share this Google search result (a picture says a thousand words, as maybe a jump start to further reading, or visiting in person?) for images of Sami people…the colors (!) the patterns, the beautiful faces, the reindeer….beauty in the northern light.

Life is in the details….

As per usual, you can click on all of Laurel Cottage’s images to enlarge them, but we added the two crops below, as they seemed to warrant scrutiny:  Look under the white printing and you’ll see the very faint original wording. You can see the rectangular outlines of the newer info, as if it was taped on. So, it says “Norge Lappekone” in the top image, that’s pretty easy to read, but for the “Mittet” one we’re not so sure. Maybe it says the same publisher, or maybe not, or maybe it holds the photographer’s name. See what you think….Oh (well, duh!) after further searching, it’s likely that the first word there is “Enerett” which in English is “all rights reserved.” It says the same on the reverse of the postcard. (Enerett:  Mittet & Co., A/S, Oslo.) So, darn, no great mystery solved, or anything exciting but it does hint at the card maybe being a more modern production of the same image. (Indeed, there’s another one out there that must of been the earlier version.) And, you can see that someone had x’d over the “Co.” and scribbled after it, probably to make the original wording less noticeable when they were adding the new.