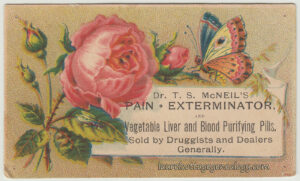 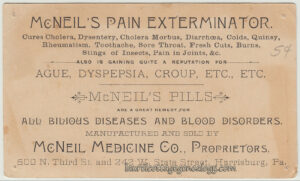 The most detailed information on T. S. McNeil, found in some quick searches, comes from a Lycoming College (Williamsport, PA) article (see link in sources below.) The authors explain that T. S. McNeil was a minister who went into the medicine business; the title of “doctor” was honorary. A number of ads can be found in old newspapers for McNeil’s Pain Exterminator (formulated in 1848) including a rather long one from 1906, stating the product was sold in 15 states, as well as in Liverpool, England and on the west coast of Africa. By the look of the card, we’d guess the date 1870s through the 1890s, but to try to narrow it down, we searched city directories. The address showing on the card for McNeil Medicine Co., Proprietors, 500 N. Third Street and 242 W. State Street, Harrisburg, PA was not found, however a few entries from 1891 – 1895 show 1111 N. 3rd St., (so if we were betting, we’d bet that the card is from the 1880s.) Thomas S. McNeil was born in 1814 in Virginia and died, unfortunately quite young, in 1847 from a drowning accident.