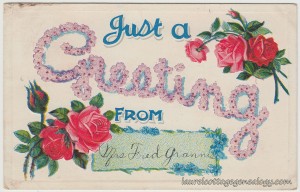 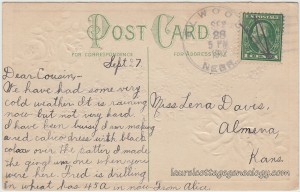 This is a Lena Davis one, and we’re not yet trying to figure out who is who exactly, as there are more to sort through and post, and that’ll come later. But it’s a perfect postcard to put up on the heels of the prior, since there’s a gingham reference. It’s a great one typical to the Midwest farm country in 1912, with reports of the weather, dressmaking and farming. It was postmarked in Elwood, Nebraska. Elwood is a village in Gosper County, whose population in 2010 was about 707.

“Dear Cousin, – We have had some very cold weather. It is raining now but not very hard. I have been busy. I am making a red calico dress with black color [collar?] over the patter[n] I made the ginghum one when you were here. Fred is drilling in wheat has 45A in now. From Alice.”