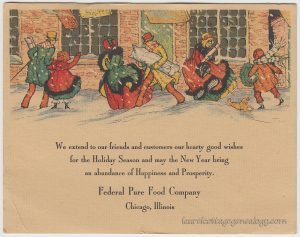 “We extend to our friends and customers our hearty good wishes for the Holiday Season and may the New Year bring an abundance of Happiness and Prosperity.

Does anyone remember any Federal Pure Food Co. labels on maybe vanilla extract or other extracts used in baking? Could be a wacked-out 😉 memory on my part, but I seem to recall old extract bottles in the back of our spice cupboard as a child with this company name. If so, the extracts were already old as the last advertisement found for the company was in 1935. And according to another news clipping, they established in 1895, though no references were found prior to 1919 when their sales ads begin showing up in newspapers across the country and in magazines like Popular Mechanics. Federal’s last known given address for correspondence was 2946 Lake St., Chicago, though for most of their advertised existence they were located on Archer Avenue.

Below, a clip from the Pittsburgh Post-Gazette, September 4, 1921 which listed the company as:  “The Federal Pure Food Company, 2301 – 2319 Archer Ave., Chicago, ILL. Largest packers of pure food specialties in the world.” 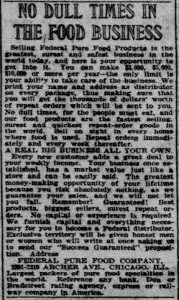 A Honolulu, Hawaii agent ad from the Honolulu Star-Bulletin, September 23, 1921: 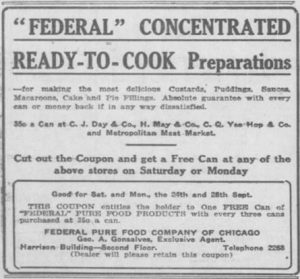 The ad from August 13, 1922  for “Agents” appearing in The Tampa Tribune, states the Federal Pure Food Company had been established “since 1895.”