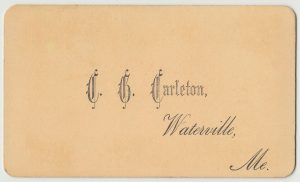 Charles G. Carleton, the photographer for the carte-de-visite in our prior post, was born in Whitefield, New Hampshire, about 1835. He had come to Waterville at least by the time the 1860 Federal Census was taken, when his occupation was listed as “dealer of books.” He established himself as a photographer in 1862 and practiced his art for a living until approximately 1889. He was well-respected in the community and said to have been one of the top photographers in the state. After 1889 we find city directory records from 1892 under the occupation of auctioneer/merchant. Examples of his photography can be found in carte-de-visite, cabinet card and stereograph format. Conflicting death dates show 1891 (Maine death record) and 1895 (gravestone marker).

Charles married Mary C. Getchell (maiden name per Ancestry.com trees) sometime after the 1860 but before the 1870 Federal Census was taken for Waterville.

Below, an ad appearing in the 1885 city directory for Waterville showing his studio address of 66 Main St.

The last photography-type listing found online for Charles G. Carleton is from 1889. In 1892 we find him listed under the occupation of commercial merchant and auctioneer and in business with James B. Dinsmore. So, it seems sometime between 1889 and 1892 (if the 1895 death date is correct) he may have left the photography business. (Note the typo on the middle initial for Charles in the Carleton & Dinsmore line.)

Charles G. Carleton died either July 2, 1891 or 1895. The 1891 date comes from the Maine death record, along with parents’ names Willard Carleton, born in Whitefield (NH) and Clarissa Smith[?] born in Massachusetts.The 1895 date appears on his gravestone. One would think the death record would be the correct date, however, it is possible that the 1891 date had been recorded late and incorrectly, in light of the 1892 listing for him as a merchant in Waterville, and also since his name appears on another reference as one of the City Officers for the Oversears of the Poor, in 1894. Or, if the 1891 date is correct, the ’92 city directory mistakenly left off that he was deceased, and the city officer ’94 reference (not published till 1908) would have mistakenly left his name in as if still current at that time.

From the Boston Globe, September 22, 1899; wife Mary C. Carleton appears to have taken over the merchant business after Charles died. (By the 1900 census, Mary is not working and is living with her sister, Ellen.)

The Charter and Revised Ordinances of the City of Waterville. “City Officers – Oversears of the Poor.” Waterville, Maine:  Central Maine Publishing Co, 1908.