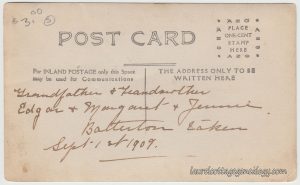 A little more credibility for our educated guess on the specific family:  Edgar’s WWI Draft Registration card shows his date of birth as November 25, 1876, living in Minneapolis, wife listed as nearest relative, and his build is described as stout (matches the photo) and eyes blue (not discrepant) though his hair by this time had become gray. He is listed on this record as a naturalized citizen of Canada.

It’s always fun to try to read any books or signs or anything else with wording that might be, by chance (or not) in a photo. This one shows the grandmother holding one of Eastman Kodak’s periodicals Studio Light. Underneath the title is Aristo Eagle, the name of another photographic journal which must have, by that time, been incorporated into Studio Light. The Eagle was earlier published by the American Aristotype Co. out of Jamestown, New York. So, the image for our RPPC was almost certainly taken by a professional photographer, rather than by friend or family, and we picture him making sure (as always, making provisions for fidgety children) the baby had something to hold, if needed.