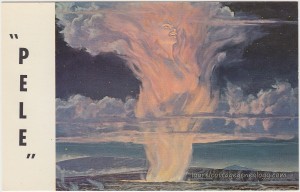 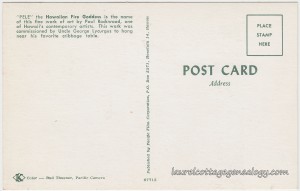 ” ‘Pele’ the Hawaiian Fire Goddess is the name of this fine work of art by Paul Rockwood, one of Hawaii’s contemporary artists. This work was commissioned by Uncle George Lycurgus to hang near his favorite cribbage table.”

California-born artist, Paul Clark Rockwood (1895-1972) created some wonderful works of art, such as the one shown here on this postcard. (Check out the first link in sources below for three examples of his paintings of Mount Mazama. Wow!) There are numerous online references for his work, including a mention of his doing cartoons in Hollywood (or the Hollywood CA area?) for a time. As always, biographical information on artists, photographers etc. involves a lot of research, so more thorough information will be put up later in a separate post. (This is getting to be a trend. Yikes.)

And if you didn’t already know, you might have guessed, from the reference in the postcard caption above, that George Lycurgus (1858-1960), was a well-known figure (businessman) connected with Hawaii. Born in Greece, he came to the United States around age nineteen, and made his first trip to the Islands in 1889, accidentally it is said, by way of a poker game. (While supervising on the loading docks, George was invited on board ship by some members of the Spreckles family, and hadn’t realized that the ship had set forth by the time they were out in the Pacific Ocean.) A great story, and evidently one of many, for this colorful man who had lived to be 101, and had played a very influential role in the early Hawaiian tourist industry.