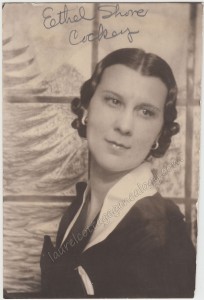 According to the obituary information posted on Find A Grave, Ethel O. Shore was born March 5, 1905 in Arlington, Kansas, and died June 8, 1969 in Dodge City, Kansas. She married William Powell Cockey, Jr. on June 6, 1928. She worked as a nurse’s aid, was a member of the First Christian Church in Dodge City, the American Legion Auxiliary, and the Ford County Heart Association Council, and she worked with the Red Cross.

Ethel would have been 23 when she married, and this photo could have been taken either before or after her marriage,  and it’s probably from the late 1920s or early ’30s. The background is interesting. It looks like she was posed before a piece of artwork that was drawn to have the viewer looking out a paned window to an outdoor scene, but is that a tree on the left or is it water at a shoreline? If you look closely at the photo you’ll notice that Ethel’s eyelashes were enhanced by, it would seem, the same person that wrote her name at the top. Perhaps this was the photo artist but whoever it was did a good job.

Ethel Olive Shore is on the 1910 Federal Census taken in Arlington, Kansas with her parents Victor H. and Ella M. Shore. Victor’s occupation shows here as Foreman for a “Section Gang” and this is likely referring to railroad work, as his WWI draft registration card shows Victor Hugo Shore, Section Foreman for the A.T. & S.F. Railway Co. (Atchison, Topeka & Santa Fe) in St. John, KS. The 1920 census taken in St. John shows this family with an additional member, Myrtle, age 9, and a boarder, Jessie Smiley.