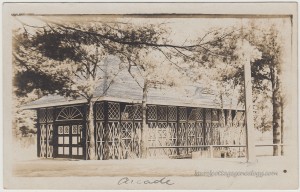 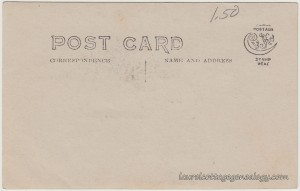 With wonderful memories of summer

This one was going to be put up directly after the recent Coney Island post, but something got lost in translation, lost in the shuffle, there was some interruption to the thought process or just brain fade maybe 😉 But it’s a beauty, isn’t it? A little sad perhaps, with that end of summer feel to it. On the other hand, maybe the arcade is happy to have a well-deserved rest and some peace and quiet. In any case, the building has a half-timbered style facade (around it’s entirety we assume) diamond-pattern window panes above, and a large, fan-style window over the double doors. What exactly did the arcade house during the season?

Well, what exactly is an arcade?

The word arcade comes from the Latin “arcus” which means arc or bow. And the definition generally describes a covered passageway that houses shops, with arches along both sides. But in modern times we probably think of a game arcade or a cantina housing food concession stands and perhaps souvenirs. If you look closely you can see two wooden oblong objects, each ending in a box shape that juts out, one attached at each side of the double doors. What were these used for – to contain the list of tenants that rented the selling space every year?

It’s also interesting that someone, with a quite steady hand, filled in the roof with pencil, taking care to outline the roof vent, and even drawing in a little something to show grass or weeds at the base of the utility pole.

As to the location, there is a small stand of birches to the left of the pole, indicating that this photo was probably taken in one of the northern U.S. states, as birches are prevalent in the Northern Hemisphere of the planet. They are considered a “pioneer” species that show up after a forest is clear-cut or after a fire.