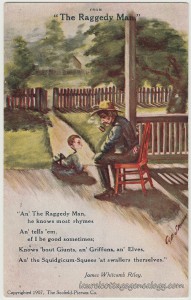 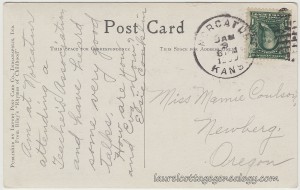 Poetry at Our House

I like to tie one post in with the next, and the tie-in on this one is maybe a stretch, but the Coney Island post reminds me of the Dog Days of summer, as does this postcard. The partial poem seen here is a childhood memory:  we had a book on the shelf at home, was it The Children’s Book of Poetry? No, maybe Poetry at Our House? But it had this poem, “The Raggedy Man”, as well as James Whitcomb Riley’s other very well-known poem, “Little Orphant Annie.” My sisters (and brothers?) used to read out loud from the poetry book, and the lines I remember best, are, “…The Raggedy Man! He works fer Pa….” and then from Little Orphant Annie, “…an the Gobble-uns ‘ll git you ef you Don’t Watch Out!”  Which at four years old scared me a little (I’d find myself later glancing up at the ceiling, pondering) but that I loved to hear. If these poems were a part of your childhood, too, no doubt all will come back in a rush, when you read them in their entirety. (There are a couple of typos in the poems; don’t mind them.) Notice the similarity between the illustration on this postcard and the one for “The Raggedy Man” (in the link) which was done by artist Will Vawter. It would not be a surprise if the postcard artist, Cob Shinn, had been inspired by Vawter’s image, as we’ve previously noticed evidence of this kind of thing within the world of old postcards.

According to an online compilation of the Jay Small Postcard Collection, Ca. 1907 – Ca. 1940s, Conrad “Cobb” Shinn (1887 – 1951) began doing art for postcards around 1907, which is the date the Scofield-Pierson Co. copyrighted the card, so it would seem that “Cob Shinn” was the earlier signature the artist used. The same shorter signature appears under another postcard by Shinn of an illustration of James Whitcomb Riley himself, with the same Scofield-Pierson copyright, which can be found for sale online at the moment. The Scofield-Pierson Co. shows up under the heading of “stationers” rather than publisher, though they could have been both. The publisher name on our postcard here appears on the back as Import Postcard Co. (And see our other Cobb Shinn postcard, This Tin Lizzy Makes Some Feed!)

To Mamie from Elsie

On to the particulars on the back…the addressee is:   “Miss Mamie Coulson, Newberg, Oregon.”  The sender wrote:

“Am at Norcatur attending a Teacher’s Association and have heard some very good talks. How are you and Eva now? Elsie Conklin.”

The 1910 Federal Census taken in Scotts Mills, Oregon, shows:  Jesse E. and Harriet B. Coulson, born Iowa, 1856 and 1855 respectively, Jesse’s occupation is Orchardist; daughters Mamie A. Coulson, born 1892, and Ethel A. Cox, born 1880, and their cousin, Eva B. Frazier, born 1890, the latter three all born in Kansas. A few quick searches for Elsie show too many possibilities, and would require a more detailed look.