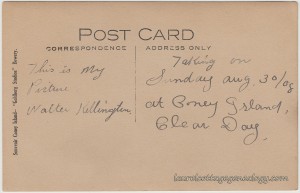 Walter, casually reclining for the camera, wrote,  “This is my Picture – Walter Kellington. Taking on Sunday Aug. 30/08 at Coney Island. Clear Day.”

This is very possibly the Walter E. Kellington that appears on a number of U.S. census records, as born about 1871 in New York, married to Ada Stillwagon (in 1895) and with daughter Gladys, born in NY about 1902 (from the 1920 census the family is living on Linden St. in Brooklyn, and Walter’s occupation is Printer in the newspaper industry.)

There is a Walter Kellington who shows up in the 1908 and ’09 city directories in Newark, occupation Feeder, who may or may not be the same person. The third possibility, that of Walter R. Kellington, born about 1891, doesn’t seem to fit, since we’d assume his birth year to be too late to fit the person in the photo, the 1891 person having moved to Chicago by 1900 also, so we’re left with the strong impression that the Walter Kellington born 1871, is correct.