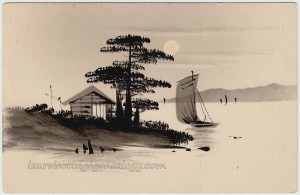 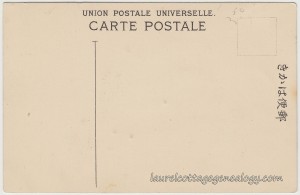 A Japanese art scene in black and grey showing a seaside home, nestled under a stand of trees, with a sailboat just offshore.

The Japanese characters appearing on the back of this unused postcard were translated by the student of a friend (thank you!) The characters are to be read right to left, which indicated to the translator that this is not a modern era postcard, and are in Kanji, which is one of the three forms of Japanese script and the one that uses an adaptation of Chinese. So, reading from the right hand side it says “mail” and then “postcard.”

“Union Postale Universelle. Carte Postale”  or in English Universal Postal Union (UPU)  “is a specialized agency of the United Nations that coordinates postal policies among member nations, in addition to the worldwide postal system.” (Wikipedia)

The UPU was established in 1874 as a result of the Treaty of Bern, and was first called the “General Postal Union.” Just four years later the name changed to it’s present day moniker. But the need for such an agency arose due to the complexities involved in sending international mail. Prior to the UPU, each country had to draw up a separate postal treaty to deal with the other nations, as well as calculate postage for each leg of the mail’s journey, and then sometimes had to engage mail forwarders when there was no direct delivery in the intended recipient country.