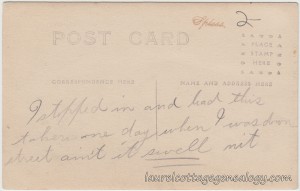 The back of this Real Photo Postcard has a name in cursive stamped at the top. This could be the photographer’s name, and though it looks like Spless, this spelling doesn’t show up much – name-wise. The better guess would be Spiess. So, checking online we find the most likely candidate to be William Spiess. His passport application of 1900 shows he was born August 3, 1862 in Frankfort on Main, Germany. He had emigrated to the United States in 1878, and was living in New York City; his occupation was stated as Photographer; and at this time he was going abroad for about six months. The 1920 Federal Census for Queens shows William, occupation Photographer, with wife Augusta, who born about 1878 in Austria.

As to the young lady in the photo – it appears that we may have her initials – N.I.T. – should anyone care to hunt for her in New York City in the 1910s.  😉  Wonder just how many women would fit these initials during this decade in New York? But it’s a lovely photo:  There’s a gentleness to her expression; the pose shows off her admirable figure; that lace blouse is just gorgeous; and she wears a nice pendant, too. (We’ll explore the city directories and look for a possible address for this photographer in a later post.)