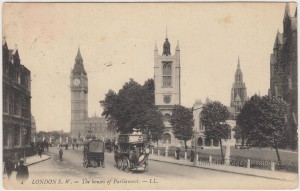 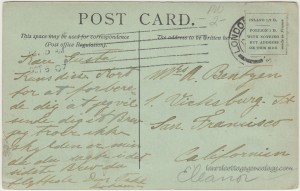 Wonderful London street scene showing the Houses of Parliament. The tower on the left is Elizabeth Tower, but commonly known as the tower of Big Ben. Big Ben is the nickname for the tower’s bell. The horse-drawn wagons here are so interesting, particularly the bigger one with the guy hanging out on the back, looking toward the camera. Too bad we can’t make out more details on the wagons. This is the second card posted on this site with the surname of Bentzen in San Francisco. It’s likely that Charles Bentzen on the “Japanese Ladies” postcard is the older brother of Eleanor, as the address on Shrader Street is the same (per the 1920 census.)

As far as I can tell, the card was written in Danish, but I am having trouble translating it. It looks something like:

The second part of the message is harder to read but the first part I think would be translated as something like: