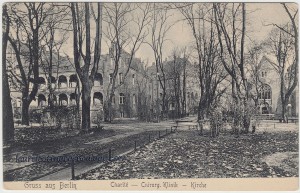 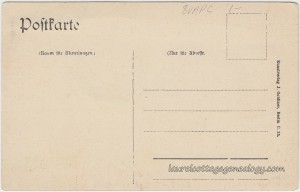 Gruss aus Berlin translates as Greetings from Berlin. This postcard shows what appears to be a Charity hospital or surgeon’s clinic with a church on the right. There may be other old postcards of this scene online but as of the date of this post, I am not seeing any. The exact location of this building is in question, other than that it is, or was located in the city of Berlin, Germany.

According to the excellent website Güstrow for historical photos and postcards, this publishing company was originally started by Julius Goldiner (1852 – 1914) who began publishing postcards in about 1895. After his death, his wife and daughter continued the company under the name of Kunstverlag J. Goldiner, and made it one of the great German postcard publishers. Kunstverlag translates as “art publisher.” The company ran as a family business until 1977.