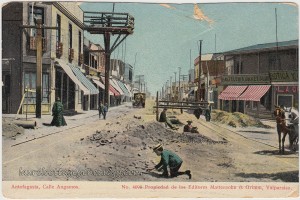 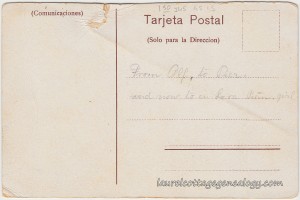 This is a tinted postcard that was produced from a photo. The exact same photo of this street in Antofagasta, Chile was found on a black and white postcard on Flickr. (See first listing in sources below.) The image here has been altered from the original photo, though. A child that was in the foreground, and a horse on the right have been taken out of this photo. Also, ours is more cut off on the right, while the black and white image is more cut off at the bottom. This is the second time we’ve come across this type of photo altering for postcards. (See the Chinatown post.) And according to the Flickr author, from a quick online translation to English, this street name changed several times. It was Manuel Antonio Matta Street; in 1872 it was called Nuevo Mundo; in 1892 Angamos Street; and in 1917 went back to Manuel Antonio Matta Street; in 1927 don Oscar Fuenzalida, Segundo Alcalde de la Junta de Vecinos de la Municipalidad, (Google translates as Second Mayor of the Neighborhood of the Municipality) tried to have it changed back to Angamos, but the request was not approved…..There are a couple of shops on the right that we can read the names of:  Pastelería Jockey Club (pastry shop) and Botica y….the rest of the shop name shows up on another postcard found online as Drogueria, so that was a pharmacy and drugstore.

What is the man in the green jacket looking for (or at)? The area in and around Antofagasta is known to be rich in minerals, perhaps he is rock hunting? As to the piles of dirt in the middle of the street:  A Wikipedia entry states sewer construction was ordered in 1905 in the city of Antofagasta, and it does look like we’re seeing a couple of rectangular shaped holes that have been dug in the ground further back in the photo. Plus, notice how on the left behind the woman on the street, there is a large pipe. So, sewer construction is the best guess.

The back has some writing in pencil on the address side which appears to read  “From Alf to Peer and now to en[?] Lora Petin, girl.”  Anyway, this is my best guess on the last part. Though this postcard is not in the best of shape, it is the only one that I’m seeing online as of the date of this post, and prices seem to be varying wildly for old Chilean postcards.