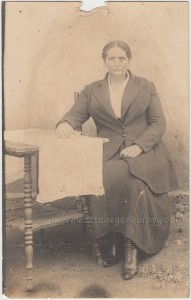 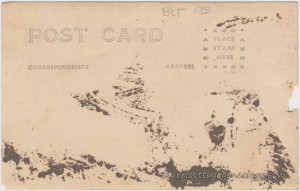 Real Photo Postcard of an unknown woman with a rather intent gaze. She looks to be possibly in her 50s, has dark hair, slightly graying at the sides, worn pulled up and back and parted in the middle. She wears a long skirt and a matching long jacket that’s designed with wide lapels and a velvet collar, and a white blouse, and heeled lace-up boots. She is outside as evidenced by the rustic setting, the ground showing as dirt with a couple of small weeds, and directly behind her is what looks like an adobe-type wall. Her arm rests on a book (a common photo prop) which lays on top of a small cotton or linen towel or table runner that is draped over the table. The black marks on the back of the card show that this postcard had been saved in someone’s photo album, but at some point it must have been in an oval frame since we can see the darker oval shape over the center of the photo. The stamp box is an AZO with two triangles up, two down, which is estimated as dated between 1910 – 1930, but the photo may be from closer to the late 1910s or early ’20s. We also might get the impression that this was taken in one of the Western states, maybe Arizona, New Mexico or California. It was found in Salinas, California.