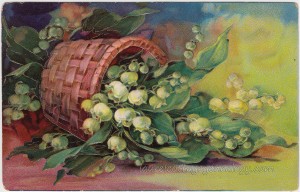 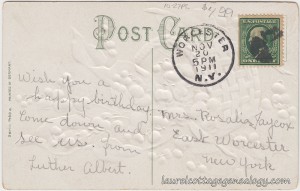 Here’s another lilies of the valley postcard – this time the lilies are the main subject, and this is one of those vibrantly colored, printed in Germany cards. The composition is great, as is the detail in the basket and flowers, and the colors, typical to this type, showing a deep violet, a blue, a red, a rose, and the standout here (maybe less often used) of chartreuse. (Love the wild mix of colors.) The lilies of the valley, also called May lillies are spilling out of the basket which is tipped on it’s side.

The sender wrote:  “Wish you a happy birthday. Come down and see us. From Luther Albert.”  This card didn’t have far to travel, since it was postmarked in Worcester and mailed to East Worcester, New York. Today’s map shows East Worcester about 4.8 miles northeast of Worcester. Both towns are in Otsego County, and located in the northwestern foothills of the Catskill Mountains. The card is addressed as:

The sender, Luther H. Albert, born about 1860, appears on the New York State Census (and multiple census records) in Worcester with his wife Elva, born about 1862. They are farming.

Multiple census records also show for Rosalia Jaycox, who is Rosalia Ostrom according to the Find A Grave website, born in 1842. She was married to Samuel Jaycox, born 1834 and died in 1907, both born in New York. There is also another Jaycox family (on the NY 1905 Census in Worcester) John, Melinda and daughter Edna, who would likely be related.