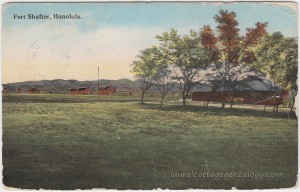 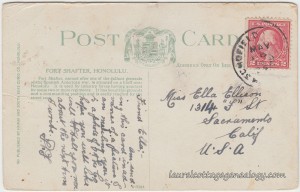 The postmark year on this one doesn’t show up but since the postcard has a two cent stamp, it would be from 1917 – 1919, when the postal rate was raised during WWI. The postmark shows Schofield which is Schofield Barracks, a U. S. Army installation in Honolulu. The caption shows:

“Fort Shafter, Honolulu. Fort Shafter, named after one of the gallant generals of the Spanish American war, is situated on a bluff near Honolulu. It is used for infantry forces having quarters for some two or more regiments. It has beautiful grounds and a commanding position and is easily reached by the street cars.”

The sender wrote,  “Friend Ella; –  Am sending this card in advance of a picture & am mailing you it is a photo of the Co. hope you will like will tell you more about the next time I write.  L[?] F.”  The sender, whose first initial is difficult to pinpoint, may have been serving in the army at this time, because of the postmark location and his promised photo of the “Co” which would seem to indicate “Company.”

According to a Wikipedia entry, construction for Fort Shafter began in 1905, and the Fort was opened on June 22, 1907. It’s interesting to put into context that when this card was originally mailed, Fort Shafter had only been operating for about ten years.