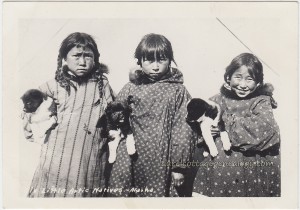 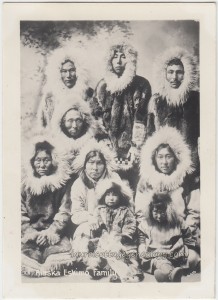 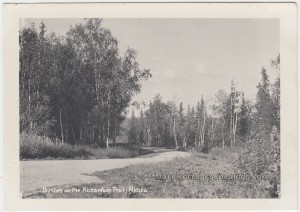 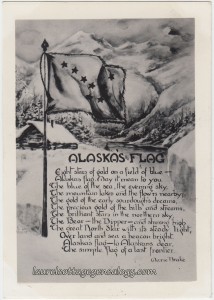 Here is a wonderful collection of vintage black and white photos, (in very good condition except for the top two which have some major creasing) estimated to have been produced in the 1940s for the tourist trade. However, the original of at least one of the photos, that of the children holding the sled dog puppies, was taken by Frank H. Nowell (1864 – 1950), who was photographing in the Nome, Alaska area from about 1901 – 1908. (Notice how the word arctic is misspelled in that photo’s caption.) Frank H. Nowell was the official photographer for the Alaska Yukon Pacific Exhibition, (the 1909 World’s Fair held in Seattle) and later ran a commercial photography studio in Seattle. The photo of the beautiful family with the caption “Alaska Eskimo Family” was probably also taken in the very early 1900s. Too bad the tribal info was not included for the two of the Alaska Natives and the one of the totem pole. As far as the Alaska’s Flag photo, this one could not have been taken until 1935 at the earliest, when Marie Drake, who was an employee of the Alaska Department of Education, wrote the poem. The poem is, of course, based on the explanation that Benny Benson gave for his winning design which was chosen for Alaska’s (then Territory of, later to become state) flag, and later became Alaska’s state song (music written by Elinor Dusenbury.) I recall that moment in grade school, when we learned (about the territory-wide contest for schoolchildren) and that Alaska’s state flag was designed by a thirteen-year old. (There we were, a classroom of about 30 kids, collectively thinking “wow” and we were not that easily impressed, I’m sure.) What is intriguing about the photo of this painting, (and by the way the original must be beautiful, with the high snow banks, the river, the cabin, the fir trees, the mountains and the cloudy sky all appearing as the backdrop for the flag and verse) is the partial signature that appears at the bottom left. Other examples of the painting show up online as vintage postcards and tourist photos but without the signature; in the others the left side is either cropped or the signature removed.

Another mystery that we’ll have to re-visit at a later date is the location of the “famous Alaska totem pole” as no other examples of this particular totem pole were found online either in Alaska, British Columbia or Washington State.