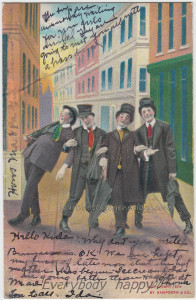 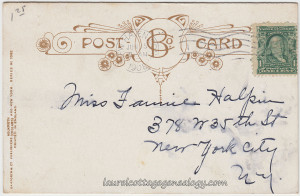 This card is along the lines of the prior post, with that early 1900s sense of humor, and the chalk painting type of colors, a little muted, not showing very great detail. In this one four pals have had a rip-roaring night on the town and are staggering arm-in-arm down the street in the early morning hours, quite drunk.

This is technically a divided back postcard since the card was printed in England in 1908. Postal regulations allowed the divided back in 1902 in England and 1907 in the U.S. (March 1, 1907.) I think the fact that it hadn’t been too long since the change, plus the subtlety of the dividing line of the postcard back header, accounts for Ida, the sender, having treated this as an undivided type. This publisher’s header is beautiful and one of the more distinctive. I wonder if it reminds anyone else of a cat with those “kitty ears.” Bamforth & Co. was started by James Bamforth in 1870 in Holmfirth, West Yorkshire, who started out as a portrait photographer, moved to making lantern slides which led to making silent films. Much has already been written about the company and is easily found online. According to a Wiki entry Bamforth & Co Ltd. starting making “illustrated ‘saucy’ seaside postcards” in 1910, so this 1908 postcard might have been one of their earlier ones.

“Hello kids. Why don’t you write. Business is OK. We are kept very busy of late now that the hot weather has begun. Ice cream sodas are going better than half off[?] We are at home. Love to all. Ida….Hows Ma & Pa ..?…our love[?]….The boys are anxiously waiting for your girls arrival. They are going to meet you all with a brass band.”

Fannie Halpin was born in New York and is the daughter of Meyer and Rebecca Halpin, who were both born in Russia and spoke Yiddish. She is on the 1910 Federal Census for Manhattan at the same address as the postcard, with her parents and siblings. She had older brothers Harry and Nathan, a younger brother Max, and a younger sister, Susie. Apparently the family had changed it’s name to Halperin some time between the 1908 postcard date and the 1910 census. They show up on the 1905 New York State census (Fannie was working as a bookkeeper) living a block over on 36th St. and under the name Halpin. Meyer Halpin/Halperin owned his own furniture store. By 1920 the family has moved to New Haven, Connecticut. The 1920 census shows Meyer and wife Rebecca, Nat and Matthew (Max had changed his name to Matthew); living next door is Fannie, who is now Fannie Corr, widowed, and with a 3-year old daughter Phylis (born in Connecticut.) The 1940 census shows Fannie and Phyllis Corr, and living next door is Fannie’s brother Matthew I. Halperin, and his wife, June. Fannie by this time is a secretary at an orphanage, and Phyllis is a public school teacher.