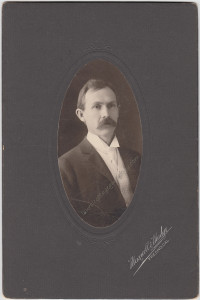 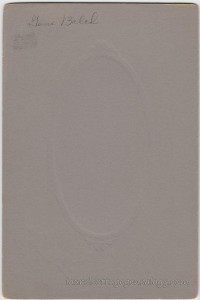 Oval studio portrait of a handsome gentleman in a dark suit jacket with a white or light-colored patterned vest, white tie and wingtip style collar. He is identified on the back as Gene Balch. This is very likely Albert Eugene Balch, who according to the U. S. City Directories, Voter Registrations and U. S. Federal Census records, had a long career in the school system in Fresno, as principal of Emerson, Washington Junior High, Longfellow Junior High, and was also Assistant or Deputy Commissioner for the Superintendent of Schools (at least approx. 1914 – 1917.) Born in Kansas, about 1874, he appears to be the same person as on the 1880 Federal Census taken in Chase County, KS with parents Albert and Almira Balch, and other household members Elliot, Carrie, Mary and Homer. Fresno city directories show many entries starting in 1906, and voter reg as early as 1894. (The 1900 Fresno directory shows an Albert and an A. E. Balch, living in Oleander with occupations for both given as farmer. This may be Albert Eugene and his dad.) The 1910 census in Fresno shows wife Mary (married about 1898); the 1930 shows Albert E. Balch with wife Mary, and their daughter Nellie. A 1935 city directory shows Albert is married to second wife Cydney (various spellings). By the 1940 census, Albert, Cidney and Nellie are living in Santa Cruz, California; no occupation for Albert E., so he is likely retired by then.

As for the photography studio, the signature shows “Maxwell & Mudge, Fresno, Cal.”  This studio opened in about 1898 when John Franklin Maxwell took in A. C. Mudge as partner. More detailed information on the photographers will be put up under a separate post.